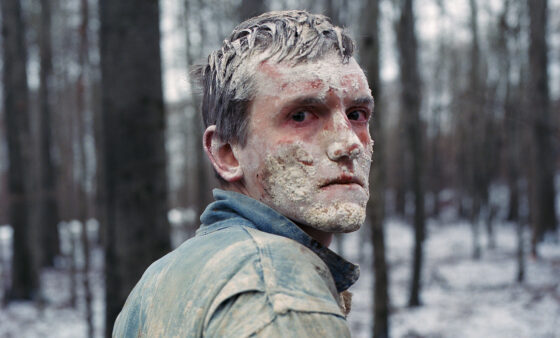 In Hlynur Pálmason’s enigmatic short Seven Boats (which screened at TIFF 2014), a man adrift at sea in the wreckage of his vessel was ignored or pushed away by the occupants of the smaller boats floating around him. Winter Brothers, the Icelandic filmmaker’s first feature, recalls these motifs of rejection and the unforgiving natural elements in an unusual tragicomedy, set during an indefinite time period (post-WWII but pre-DVD) and a distinct but nameless location, a limestone mine somewhere in northern Denmark.

We are presented with two men who share a crummy cabin and a trying job at the chalk factory. They could be only roommates, but the film’s title tips us off on the nature of their kinship. The hardships of their daily routine, though, which sees them burrow through the darkness of the mine before coming out to the snowy winter’s blinding whiteness, has altered their relationship. The fact that female presence in the surrounding area is sparse does not help, and Emil in particular (Elliott Crosset Hove, winner of Best Actor in Locarno) has developed behavioural patterns that verge on the socially unacceptable. His traffic of a suspicious moonshine mixture threatens to be exposed when a co-worker becomes ill.

Winter Brothers was created on location (written, rehearsed, and with the editor on set) as per a methodology of immersion dear to visual artist turned filmmaker Pálmason. An expatriate in Denmark, Pálmason seemingly reproduces in his work a process of electing a new place and making it his own, after stripping it from too recognizable attributes. And indeed, an acute sense of space and texture (ice, chalk, wood) helps involve us in the ritualistic life that so maddens Emil.