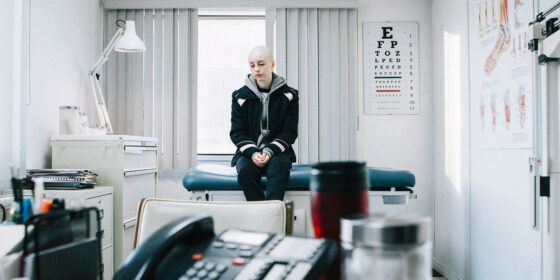 Taking place during a barren Hamilton winter, Calvin Thomas and Yonah Lewis’ White Lie is as intimate as it is claustrophobic. Katie (Kacey Rohl) is a cancer poster child, a star of local fundraisers and surrounded by supporters. But Katie begins her day shaving her head, her chemo appointments involve getting empty pill bottles with her name on it, and her Instagram filters are chosen on the basis of which one makes her look the sickliest. Katie never had cancer, but has managed to manipulate her image, her body, and her whole life to maintain the fiction that she does. This is no spoiler: the drama of the film comes from her attempts to make sure that no one finds out. Katie soon realizes that the ease she has in existing as just an image, as well as the financial benefits that come from sad photos on a fundraiser page, aren’t as easy to maintain in real life.

Thomas and Lewis are able to create as much devastation from conversations where Katie’s lies are challenged, notably with her father (Martin Donovan) and a previously supportive lawyer (Sharon Lewis), as from the digital dread of a Facebook notification. Rohl, who cut her teeth on this kind of innocent duplicity on Hannibal, is remarkable as Katie, who despite all her actions always has our sympathy. As the dominance of the digital becomes more and more prevalent in our lives, White Lie reminds us that there’s always a reality whose consequences are inescapable.