What You Gonna Do When the World’s on Fire? (Roberto Minervini, Italy/US/France) — Wavelengths 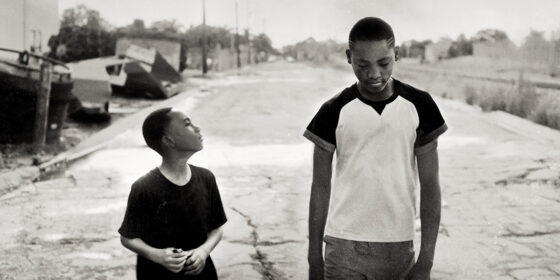 Judging from the early reviews of What You Gonna Do When the World’s on Fire?, which spurred me to write these fast and loose impressions, Roberto Minervini seems to have painted himself into multiple monochrome corners—a white Italian man (albeit one who lives in Texas) making a film named after a spiritual about socially oppressed black Louisiana and Mississippi; a so-called 120-minute “documentary” lyrically shot in gorgeous, high-contrast black and white; a political film that has as some of its subjects actual political activists (the New Black Panthers), but in itself isn’t activist, rather humanist—because he is a filmmaker, not an activist, or maybe it’s more appropriate to call him a magician.

Because what Minervini actually is doing, and I mean this in all honesty, is in fact magic: how he manages to create such relationships between filmmaker and what we’ll call, for the sake of argument, “documentary performer,” is well-known now, post so-called Texas Trilogy, to be a product of a long immersion in these communities, to the point of dissolving the border between the camera and the subject, between reality and construct. Though how it actually is done is magic, because you’re never going to see the tricks revealed unless you’re standing next to him on location, in these peoples’ houses and workplaces, for just as long as he does, which for a viewer or a critic is an utter impossibility.

That this is also urgent filmmaking pretty much goes without saying. What You Gonna Do is what the French still call engagé, which does not mean a call to arms but rather a desire for self-reflection that, eventually, might lead to the honing of the spirit of the political animal. The distinction may be too subtle for trade critics who have to wade knee-deep through disposable garbage of both commercial and “artistic” movies, but we should not demand from political documentaries the same easy, consumable form that we do from, say, a Damien Chazelle film. You want to see colourful Indians and music, watch Treme. (And I miss Treme; my one personal criticism is that there really could have been more music here, which is integral to the communities, but perhaps that’s because I know Minervini began with the idea of making a film in collaboration with musicians.) You want an anti-Trump film? I’m sure Michael Moore delivers a whopper, in a very entertaining package. But, hell, with what’s going on in the stupefying reality-show politics of today, isn’t “entertaining” the last thing that we need from a political documentary? Does it really matter that, say, some of the four strands of this film are more “elaborately realized” than others? These are people’s lives we’re talking about, and we have only been granted the privilege to be in their presence for a little more than two hours, which, we should remember, has been edited down from more than a hundred hours of footage, and editing means that choices have been made. Don’t you think Minervini and his editor could have delivered something like, to cite the clear critical litmus test of recent New Orleans portraiture, Spike Lee’s When the Levees Broke? Don’t you think maybe he’s after something different? It’s character that matters here, fleeting moments rather than overarching drama. Perhaps this is hybrid filmmaking as termite art—and who cares how long it is, it probably should be longer.

Minervini does not attempt to solve the problems of police brutality, inequality, poverty, social injustice, etc., because he’s a filmmaker, not a politician—not to say that filmmakers aren’t just as qualified as today’s politicians to solve the world’s problems, but that’s for another time. (Minervini 2020, why not.) And as a lowly filmmaker, we should also not expect him to solve the problems inherent in fictionalizing reality, but boy, does he give it a shot. He does a great job at making us angry at reality—and to speak personally, angry at how this depiction of reality is itself characterized—along the way. But ultimately, as someone else said, I guess there are some very fine people on both sides, right?