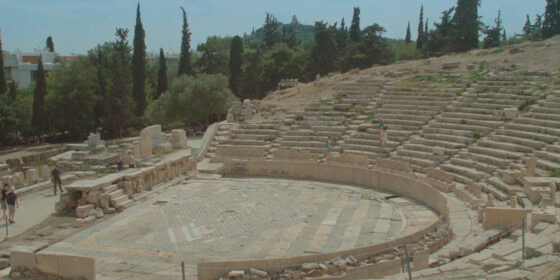 The latest philosophical documentary by Astra Taylor (Examined Life, Zizek!) takes on a very timely question, one she can’t be faulted for failing to answer in just under two hours. However, What is Democracy? does suffer from a rather scattershot approach, as though the sheer monumentality of the problem undermined the clear inquiry that defined Taylor’s earlier films. Looking for some grounding, we begin in Greece, where Prof. Elini Perdikouri explains the notion of the demos according to Plato and Aristotle. But without a great deal of explanation, the majority of the film remains in contemporary Greece, examining the 2009 economic collapse, the austerity crisis, and the failure of the left-wing Syriza party to adequately stand up to the European Union.

Taylor is making a point, in a way: democracy today is inextricably linked to global economics. But why make Greece the lone example of this problem? Similarly, Greece’s particular role in the global refugee crisis is placed in the spotlight, along with some predictable racist and anti-immigrant statements from Trump Republicans in the US. With a whole world at her disposal, why does Taylor insist on making these examples into metonyms for the entire problem of modern democracy?

One gets the sense that What is Democracy? might have been edited in a different form, one that clarified its purposes a bit more deliberately. Having said that, Taylor is wise to use feminist art historian Silvia Federici’s analysis of the painting The Allegory of Good Government as a continuing refrain. And for rare clarity on the intellectual issues involved, a hearty word of thanks to Berkeley political philosophy professor Wendy Brown, who definitely merits a documentary profile all her own.