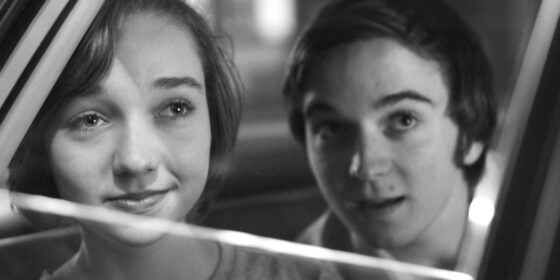 Having given Bruce McDonald a pretty rough ride in this space last year for the so-bad-it-had-to-be-contractually-obligated horror movie Hellions, I’m inclined to go easier on Weirdos, which has the same rambling, open-road sensibility of the director’s very best movies. Not that this gentle period comedy (dateline: Antigonish, 1976) ever really challenges the raucous Roadkill (1989) or Hard Core Logo (1996): it’s too composed and careful for that, with elegant black-and-white cinematography overlaid on a typically intricate script by Daniel MacIvor, a playwright who never met a metaphor he couldn’t work from every angle. The theme here is “weirdness,” both as felt and perceived by teen runaways Kit (Dylan Authors) and Alice (Julia Sarah Stone), whose desire to escape their backwater, first for a weekend of partying and then for good, is linked to more universal adolescent stirrings. It’s easy enough to mock the device of having Kit intermittently converse, Play It Again, Sam-style, with Andy Warhol (Rhys Bevan-John), but MacIvor and McDonald don’t take it all that seriously either, and while the ’70s-isms are laid on a bit thick—from the Khmer Rouge on the television to Harry Nilsson on the soundtrack to Mother, Jugs & Speed (1976) at the local movie theatre—the film never over-steps its modest, tender and ultimately humane implications. Appearances by Stephen McHattie and Molly Parker provide a sense of continuity with McDonald’s other work, and it’s nice that this latest work by a filmmaker who has sometimes chased hipness past its expiration date concludes on a note of deliberate, intergenerational non-cool.