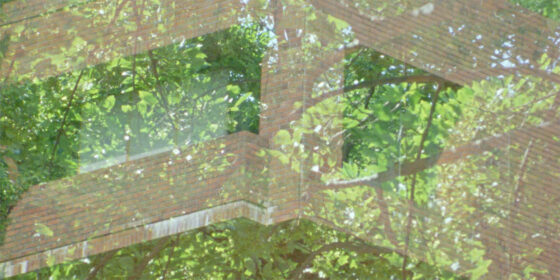 A rediscovered film by Japanese experimental filmmaker Toshio Matsumoto, 1986 Summer (1986), unleashes a torrent of images over three silent minutes. The film seems to comprise a single, double-exposed reel with two layers of imagery set against each other: one layer, a scattering of thousands of single frames of green leaves framed against a blue sky; the other layer, various zooming and jittering shots of what looks to be the brick facade of a modernist institutional building. Secreted in between, almost subliminally, are individual frames of a woman set within the green-brown-blue space. The work is succinct—and, compared with the filmmaker’s rather more assaultive 1970s shorts, relatively serene—but Matsumoto manages to condense a thicket of juxtapositions and sensations into the film’s short runtime, and the viewer, meanwhile, must find a secure space somewhere between double vertigoes of information overload and being shot through space.

1986 Summer is something of a key work in Andréa Picard’s precisely orchestrated shorts programs for Wavelengths this year, a secret codex for a set of new artists’ moving-image works pursuing new formal approaches to spaces, environments, and bodies. Matsumoto’s is one of a number of works that suggests an attunement to the elemental and environmental, capturing impressions on the fly in ways that frenetically alternate between the concrete and abstract. But it does more than this: Matsumoto’s film also enlists, even implicates, the spectator and their sensing body as a central protagonist in the work.

If Matsumoto’s film draws out a concern shared among these short works—that of the human body’s relationship with natural and built environments—it also marks a kind of crisis of perception, the sense that our views of the world are desperately in need of reconfiguration. One feels this even in a relatively low-key work such as Simon Liu’s Fallen Arches, whose dense colour mesh yields something like an MDMA city symphony, or Kevin Jerome Everson’s Polly One, a succinct work that documents a solar eclipse. The subject itself is nothing revolutionary—indeed, it’s also the subject of James Benning’s L. Cohen, playing elsewhere in the program—and anyone familiar with the artist’s Twitter account, where he offers sporadic, monosyllabic weather reports (“hot,” night,” “sun”), knows that Everson has a thing for environmental conditions. But it’s also likely Everson’s first true psychedelic film, representing the euphoria and abstraction of lens-based capture through the vibrant, undulating variations of colour and coronas of small-gauge film stock.

More explicit in this regard is Chilean-Canadian filmmaker Malena Szlam’s Antiplano, which remaps the dry, mountainous landscapes of northern Chile and northwest Argentina with densely superimpositioned desertscapes, flickering skies, and layered horizons. A follow-up to (and significant expansion upon) her beautiful 2013 short Lunar Almanac, Szlam’s new film offers a representation of landscape that reconfigures its geographic fixity and temporal grandeur. Here, a soundtrack of volcanic bubbling—a crackle reminiscent of the sound of burning charcoal in Xenakis’s Concret PH—frames images of a rocky topography that’s more liquid and gas than fixed stone.

Still more environmental instability arises in Sky Hopinka’s Fainting Spells, which offers up a dizzying play of superimposed skies and landscapes, some rendered in negative, that recalls his earlier film Jáaji Approx. But here, drifting horizonally across the screen, a poetic, handwritten text scroll, sometimes doubled, multiplies the registers of interpretive data with its own imagery of bodies, geography, and fire collapsing into metaphor and colourful abstractions. (“What are these blue-greens, oranges, and pinks?”) Cloaked figures drift in and out of the frame, and violent bifurcations and alterations of image, combined with Hopinka’s typically elegant editing rhythms, imply a mysterious and melancholy journey through the smoldering instability of a continually shifting landscape.

Various works carry this mutability of space into architectural realms as well. In Julio Iglesias’s House by Natalia Marín, abstract computer renderings of surface textures are employed to obliquely illustrate a text on the use of the Spanish pop star’s South Florida mansion as an architectural model for mass-residential developers in China. Here, environments oscillate between the material and the speculative as warped notions of “typical” Spanish architecture find concrete form, only to be blurred in the dizzying ephemerality of the Chinese property bubble. Helena Wittmann’s gorgeously textured Ada Kaleh, meanwhile, takes its title from a now-submerged island in the Romanian Danube, and renders its succession of cozy domestic spaces with something of an underwater quality. Captured by Wittmann’s rhythmically alternating pans (left-right and right-left), each space becomes a discrete container of dim light and hushed sounds, which seem to capture the movements of objects and ambience rather than voices. Peeling plaster, a sleeper’s foot, a blowing curtain: each is subject to the film’s subtle and elegantly mutating contrasts, made still more enigmatic by oblique, polyglot onscreen text which switches between Mandarin, Brazilian, and English.

Where Ada Kaleh portrays bodies at rest, other Wavelengths shorts feature more restless figures, migrating between real and imaginary universes and structures. The very title of Ross Meckfessel’s The Air of the Earth in Your Lungs broadcasts a specific and physical relationship between the spectator and the world, a relation that the film continually reorients in its pivot between analog and digital imaging technologies. The film begins by leading us through gaming environments (shot over a gamer’s shoulder in 16mm) before taking us through a lake tour and robo-punk dance party. As the film progresses, this series of contrasts becomes less easy to parse: a leafy forest (not unlike Matsumoto’s summery setting) is subjected to Google Maps’ scrolling, smearing, and shattering translations; the godlike POVs of a drone camera exchange views of the mutable world with the whirling whip-pans of a Bolex.

The restless body of Lawrence Abu Hamdan’s Walled Unwalled is the artist’s own. Filmed in the sound studios of the Funkhaus in Berlin, former centre of GDR-era radio broadcasting, Hamdan’s film is the latest in his series of artistic investigations into sonic research, this time focusing on the audiovisual affordances of walls via a range of assorted topics, from military-grade thermal camera used to detect the heat lamps inside an illegal pot-growers’ house to recorded testimony from the murder trial of South African sprinter Oscar Pistorius. As he wanders through and reconfigures the space of the Funkhaus, Hamdan elegantly leads the viewer through a loosely rhetorical treatise on the legal, political, and sensory problems of walling and enclosure. In this way, he models a kind of discursive movement that is both bodily and intellectual, rhyming with the “molecular information that migrates through our world,” rendering all dividers utterly permeable.

The porosity of the body and its deep inextricability from the spaces around it are also at play in Mary Helena Clark’s The Glass Note. As with many of Clark’s recent films, this work offers up an increasingly mysterious set of juxtapositions and associations, auditory and haptic sensations, whose collision generates innumerable weird undertones. The lithophonic “ringing rocks” of rural Pennsylvania, which chime like bells when struck with a hammer; a creaking boat; a cargo-bay door opening onto a rendered ocean; an enlarged uvula—Clark stealthily bounds from one object to another as if searching for a lost mode of sensation, a seventh sense through which to process and remake the world.