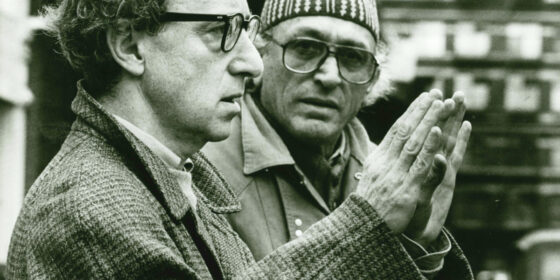 There’s no excuse making a poor film on the life and work of one of cinema’s greatest cinematographers. A film about Carlo Di Palma should practically direct itself: stitch together clips from his major (and some of his minor) work—from Pietro Germi’s Divorce Italian Style (1961) and Antonioni’s Red Desert (1964), Blow-up (1966) and Identification of a Woman (1982) to his 12 films with Woody Allen—along with some smart comments from smart people and, presto, you have your movie. It’s hard to imagine a less difficult documentary to make.

The sweetest thing about Water and Sugar: Carlo Di Palma, The Colours of Life is also the sourest: the late cinematographer’s wife, Adriana Chiesa Di Palma, put herself in charge of the project, and director Fariborz Kamkari appears to have been assigned to include her in as many frames of freshly-shot footage as possible. She’s seen arriving for interviews in numerous international locales with mostly over-the-hill directors, such as Wim Wenders, Nikita Mikhalkov (sitting at an upscale café opposite the Kremlin), Bernardo Bertolucci and Lina Wertmüller, few of whom have any direct relevance to Di Palma’s work and offer no real insights either. Worst of all is Ken Loach, who imposes upon Di Palma his own dogmatic ethos that the world is comprised only of The Greedy Ones and The People. At least we have Woody Allen, alone in this group for actually being able to talk about Di Palma as a human being and a pretty fun guy to work with.

Cinematographers come out of an artisan tradition, and the best part of this misbegotten project is documenting how Di Palma learned as a young man under the neorealist masters; he was 15 when he got a job on the crew for Visconti’s Ossessione (1943), essentially neorealism’s point of origin. His training ground included titles such as Visconti’s La terra trema (1948), De Sica’s Shoeshine (1946) and Bicycle Thieves (1948) and Antonioni’s Story of a Love Affair (1950) and Il grido (1957), where he worked under Gianni Di Venanzo, the greatest of pre-1960s Italian cameramen. Many of the clip selections are intelligent: a scene from Ossessione, on which Di Palma worked as focus puller, displays a fine example of shifting focus inside a moving shot with great depth of field.

But the key bits on his revolutionary work with Antonioni, particularly on Red Desert and Blow-up—a better back-to-back set of home runs doesn’t exist in the annals of colour cinematography—fall short of the mark. There are brief glimpses of Antonioni’s crew painting the landscape for Red Desert’s exterior shots, short sound bites from the director and DP, and, for fun, a home movie of Di Palma hanging out at a pool with Monica Vitti (who fell in love with Di Palma after dumping Antonioni) and Sergio Leone. But there’s no real analysis or deeper appreciation for what Di Palma did for colour cinematography, or how he did it. Like we said before, it isn’t that difficult to find some people who can speak intelligently about cinematographic art. But apparently, for all their love of their subject, it’s too much for Chiesa and Kamkari.