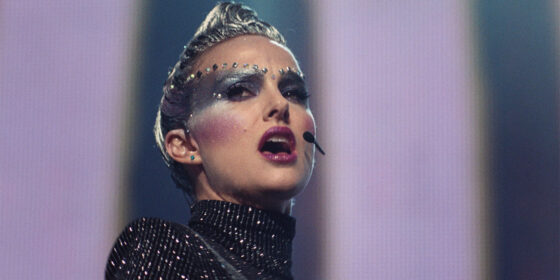 Brady Corbet’s new film is divisive: in its structure and vision, and in the way it elicits audience response. At the Venice press screening, it sparked immediate bravos and boos—spontaneous cries of love and hate. Neither does the film lend itself to discourse. Like its main character, pop singer Celeste (Natalie Portman), it responds to the social tragedies of the past 20 years with a lyrical vision that speaks through poetry rather than prose.

The film begins in 1999, the dawn of a new century and the digital age, a transition Brady defies by shooting Vox Lux on 35mm. The luminous texture and subtle movement of projected film invokes a prelapsarian moment, and lost innocence is a major crux of the film. This is mirrored in the film’s narrative, which begins in a classroom—a discursive moment abruptly and traumatically silenced by a violent tragedy that American viewers will find all too familiar. The film’s main character, a young girl who survives the mass shooting, responds to the violence through song, and the film follows suit. Violence gives birth to vox lux: a voice of light, and Celeste’s song soothes a nation reeling from lost innocence.

But Celeste herself must continuously cannibalize her dreams and those of her sister Eleanor (Stacy Martin) in order to fuel her rise to stardom. She herself is certain that she struck a deal with the devil: the sardonic wisdom imparted in Willem Dafoe’s voiceover may well be Mephistopheles. The young Celeste is played by Raffey Cassidy with quiet determination, while Portman brings intense bravado to the character in the second half of the film, set in 2017. The film is structured around these two parts—as Genesis and Regenesis—and both respond to social tragedies that render language mute.

At the centre of the film is Celeste’s turning point: a recurring nightmare places her future at the end of a long tunnel where multiple selves lie sacrificed on a path to salvation, hell, or both. Cassidy already looks eerily like Portman in this shot, and will soon emerge as her glitter-encrusted alter ego: a popstar icon who rides this nightmare to its logical conclusion while appropriating its images for videos. The three-part structure of the film mimics Corbet’s first film, The Childhood of a Leader, with the finale bringing the film full circle. The movie ends with a spectacular concert that pits one stage production against another: child killer and pop diva vie for the souls of a country uncertain whether an angel or devil should lead the way. Vox Lux doesn’t fuck around with the mundane: this movie proclaims itself a work of art soaked in painful memories, lucid allegory, and blood.