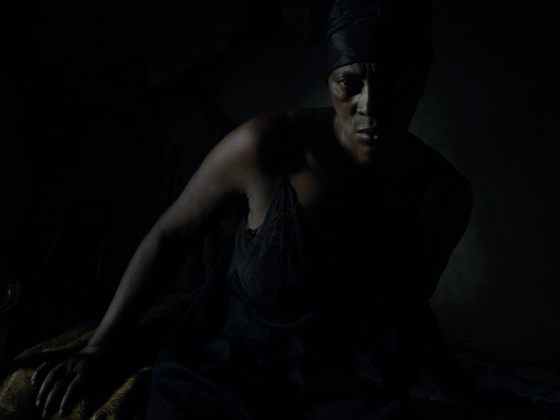 A moving study of mourning and memory, Pedro Costa’s revelatory new film offers an indelible portrait of Vitalina Taveres Varela, a fragile yet indomitable woman who makes the long voyage from Cape Verde to Lisbon to attend her estranged husband’s funeral, but misses the event itself because of cruel bureaucratic delays. The name and tragic story will be familiar to those who know Costa’s previous masterwork, Horse Money (2014), in which Vitalina appears as one of the ghostly figures alternately confronting and comforting Costa regular Ventura during his soul-searching stay in a haunted sanatorium. Vitalina Varela forms a diptych with that earlier film, extending its intermingling of personal and national trauma while refining Costa’s unique mode of oneiric first-person cinema in which inner voices are theatrically recited like prayers. Ventura returns here as a priest gripped by a crisis of faith that recalls the fear, trembling, and self-doubt animating his somnambulant patient in Horse Money. Vitalina’s singular presence, meanwhile, is dramatically expanded into a mesmerizing starring turn, which lends simmering power to the larger project shaped across Costa’s films post-In Vanda’s Room (2000): giving epic but still intimate cinematic dimensions to the urgent struggles of the dispossessed.

Costa’s literally and poetically darkest film, Vitalina Varela plunges even deeper into the endless night of phastasmagorical soliloquies and serpentine wanderings. The extended, pre-credit opening sequence reveals Costa’s commitment to a film-noir darkness that is simultaneously palpable and ethereal, equally an expression of his sculptural poetics and of his characters’ imperilled status on the far margins of society. Under a starless night sky, a small parade of tired men in funereal black slowly marches past a high-walled cemetery. Two help along an unstable Ventura, until he falls in exhaustion beside the road while the rest of the men drift back to their respective homes. In a beautifully rhythmic sequence, Costa follows each of the men as they open and close the creaking metal doors of their humble cinder-block houses, pausing statuesquely before entering, as if to make clear an expressive connection between the weary bodies and worn buildings. Indeed, Costa offers the dilapidated houses as intimate realms to be respectfully explored, as he transforms the weathered buildings into luminous, almost 3D icons of the protected life and space so longed for by Vitalina.

Costa has always subtly mined deep meaning from the lived-in and most often hand-built spaces inhabited by his characters and collaborators: spaces that are both private and communal, isolated yet interconnected by the murmur of neighbourhood sounds that pass through their thin walls. In Vitalina Varela, Costa finds a richly symbolic dimension in those buildings that best reveal the inner lives of Vitalina and Ventura: her cherished but abandoned house in Cape Verde, her dead husband’s ramshackle Lisbon home, and Ventura’s empty, seemingly abandoned church. The parallel suggested between dilapidated home and church as equal expressions of Vitalina and Ventura’s alienation from the world underscores a newly explicit sacred dimension in Costa’s cinema, one given overt expression in the film’s second half in the dialogue and prayers shared by the two characters as Vitalina struggles to understand her paradoxical love for the man who abandoned her, and Ventura grapples with a fateful moment when he neglected his sacred charge. Like the abandoned structures they inhabit, Vitalina and Ventura desperately need to be shored up and protected from the elements by a sturdy roof.

An early signal of the spiritual symbolism and direction of Vitalina Varela is given in the film’s opening sequence and first close-up: a worn, purple-graffiti crucifix that seems to confront Ventura immediately after he breaks from the funeral procession to rest beside the road. Everyday objects and sites are transformed by Costa into sacred symbols and shrines that shimmer with fervent private meaning as instruments for holy rites, like the bottles of perfume set solemnly as offerings on Vitalina’s candlelit table by an ex-cellmate of her husband, or the utility poles shown that become vernacular crucifixes and symbols of Ventura and Vitalina’s search for truth and reckoning. At another point, rhythmic close-ups of Ventura’s hands leaning against the base of the same kind of utility poles as he slowly finds his way back to his church transforms these everyday markers into stations of a private Passion.

Costa, of course, masterfully understands and embraces the power of cinema to give grace and gravity to the everyday, to transform non-actors into wondrous cine-theatrical presences equal to those of Rossellini, Straub-Huillet, Reis, and Condeiro. But to those artists’ austere control, Costa adds an element of the thrillingly cinematic sublime: there could be no better example than Vitalina’s stunning and dramatically delayed entrance, when she appears as a backlit silhouette standing in the doorway of a phantom airplane taxiing towards a chorus of women poised on the tarmac, airport janitors anxious to console the weary traveller. In Horse Money, Vitalina tells of the fever and incontinence that wracked her body during her difficult delayed flight, but as she here descends the metal stairs barefoot, dripping wet, it is as if she had swum or walked across the ocean: the close-up of her unshod feet shedding shining droplets onto the steps is an image of a saint or a superhero, a statement of strength, naked vulnerability, and sanctity.

Costa’s is a willfully pure cinema, an uncompromised and rapturous mode of B-film able to abandon and reinvent the rules and traditions of the classical cinema he understands so well. How fitting, then, that Vitalina’s entrance poignantly echoes the delirious and fateful airport ending of Joseph H. Lewis’ (and John Alton’s) minor magnum opus The Big Combo (1955), and that the wind so frightening to Vitalina as she lays awake in her bed seems ushered from the films of Sjöström, Murnau, or perhaps Borzage. In Vitalina Varela Costa makes clear that, like these filmmakers (and like Borzage especially), he understands and fervently believes in the potential of cinema to realize miracles onscreen— whether to cure infirmities of the body and soul, to bend the present back to recover the past, or to calm the winds of the most savage storm. Indeed, a series of small, profound miracles move Vitalina, drawing her out of her isolation to discover new friendship and perhaps forge a peace with her past. The sound of the raging storm above her bed is magically echoed, in a matching shot, by the neighbourhood men securing her roof and transforming the house into her home. The image of the men at work beneath a suddenly blue sky then cuts, miraculously, back to the film’s touching closing image, of Vitalina and her late husband Joaquim as they built their house together in Cape Verde. Miraculous too seems the blue and open sky in this final shot, a celestial expanse only glimpsed in this largely nocturnal and interior film.

Made in close collaboration with Vitalina and shaped around her actual life experiences, Costa’s film is built from the same kind of highly personal language, stories, and singular situations as his other major works, an important dimension underscored and even emblematized by his bold use of his heroine’s name for his title. And yet the film contains an important political address to a larger situation: a suggestion of Vitalina’s embittered love for the man that abandoned and abused her as an echo of the difficult pull and dependency linking former colony and mainland, Cape Verde and Portugal, embodying the complex, contradictory identities of the immigrant, the displaced, the orphan of the storm, who is unable to find purchase on either native or adopted soil. While Costa embraces the potential of cinema as a mythopoetic and miraculous art, he also ultimately refuses its utopian promise of resolution by grounding his films in the unmistakably real lives of the collaborators who appear onscreen. And yet, in the final image of Vitalina Varela, Costa also poignantly contradicts himself by offering a tender gift to Vitalina: a purely cinematic illusion of lost innocence recovered, a moving image of all-too-fleeting happiness with her late husband, now transformed into a lasting and gently epic home movie performed by actors.