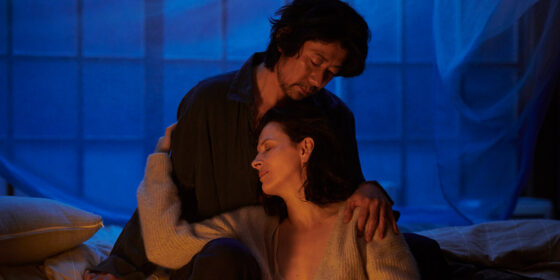 Despite the presence of an international superstar (Juliette Binoche) for the first time in Naomi Kawase’s filmography, Vision will not convert anyone to the Kawase cause. That’s because this new film doubles down on all the elements that so many critics find off-putting about Kawase’s cinema, especially a spiritual sensibility that, in terms of how it actually hits the screen, frankly comes off like tree-hugger kitsch. But, if you are sympathetic to the director’s penchant for Shinto-inspired animism and mystical hooey, you are going to have a literal blast.

It didn’t have to be this way. Kawase’s previous film, Radiance, was actually her best, largely because the director used a wisp of a plot as the armature for a host of avant-garde effects, mostly pertaining to the dazzling observation of light. Early shots indicate that Vision might be headed down the same path, particularly with some breathtaking aerial images of the forests surrounding the Yoshino Mountains. But slowly, Kawase introduces our central players: Tomo (Masatoshi Nagase), a forest ranger who, after 20 years on the job, has settled into a kind of studied loneliness, and Jeanne (Binoche), a French researcher who has come to Nara in search of a magic herb called “Vision,” which is said to possess the ability to alleviate human suffering.

As preposterous as this sounds, Kawase and, to her credit I suppose, Binoche articulate this premise with absolute seriousness. But from the outside, it is difficult not to see the film itself as a kind of allegory of authorial hubris. When “Vision” arrives, it is a scorched-earth transformation, dazzling all who are blessed enough to see it. Every thousand years, a magical alchemical force elevates mere nature into a salve for humanity’s ailing soul. If a mere four years ago, Kawase famously declared Still the Water her “masterpiece,” what must she think of this?