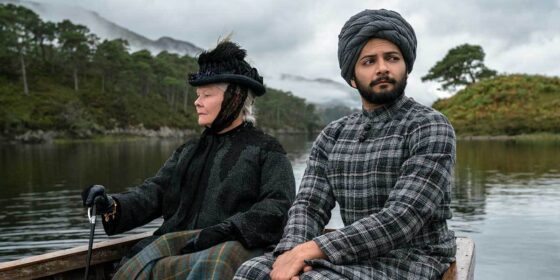 Not content with a simple erasure of colonial violence under the veil of a feel-good prestige pic, Stephen Frears opts for full-on degradation in his latest film Victoria & Abdul. Judi Dench stars as a Queen Victoria who is bored with royalty, and the way her crown alienates her from the people around her. The monarch is reinvigorated by Abdul, a young Indian Muslim brought to England for a ceremony, who catches the queen’s eye and is enlisted first as her servant, then teacher, and finally friend, becoming her only ally against the greedy and snobbish British aristocracy.

Semi-attempting to depict a balanced, mutual friendship between two people in incredibly disparate positions, Victoria & Abdul never deigns to truly criticize British colonialism. Occasional verbal jabs made by Mohammed (Adeel Akhtar), another Indian servant, are depicted as neuroticism, given that he is played like a paranoid wreck; his critique becomes a comedy of anxious irrationality in the face of the benevolence of the “Empress of India.”

Abdul, meanwhile, goes through humiliation in the name of love for his dear “friend.” He collapses to the ground to kiss her feet (his lips on her boot), he performs in silly plays for her entertainment, or he allows her to put him into positions which draw the racist hatred of the royal household towards him. (To the audience, Abdul is humiliated further when he is examined by the royal doctor and found to be “riddled” with gonorrhea, an irrelevant moment of drama that is never once referred to again.) While Victoria gains a great deal from her relationship with Abdul, it is never revealed what he receives in turn; her emotional growth is matched to his stagnation and unshakeable admiration. In a colonial version of Leopold von Sacher-Masoch’s Venus in Furs, Abdul begs his mistress for her domination, and her commitment to her power over him only strengthens his devotion to his oppressor.