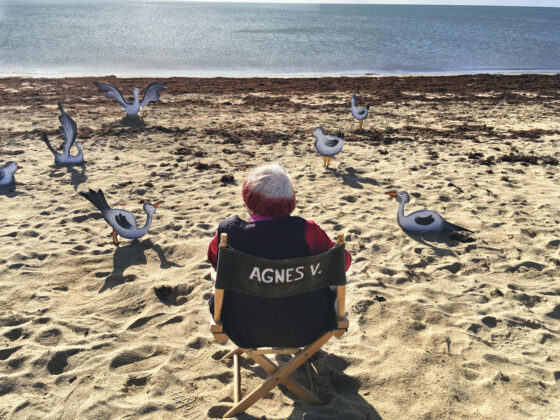 “I enjoyed setting up an enigma for which only I knew the secret,” says Agnès Varda from her throne-like seat atop a dolly, pushed along a track in a wide-open field by a technician, in an allusion to the landscapes of her Vagabond (1985). The tender-hearted irony of this utterance is that here, in Varda’s swan song, she unlocks these secrets—not in the transactional, bureaucratic manner that late life (near death) often invites, but merrily, with the uncanny ebullience of a child inside the body of (and with all the wisdom of) a 90-year-old woman whose creative work has been the conduit for all the richness a life might bring.

Varda by Agnès compiles the filmmaker’s speaking engagements at several performance venues over the past few years—an opera house, a half-full theatre with an audience of aspiring documentarians (most of whom don’t raise their hands when she asks who has seen Cléo de 5 à 7), a garden at night—along with clips from the projects she chronicles, and charming, docufictional flourishes wherein she revisits spaces from her filmographic history and activates them anew (like the Vagabond example above). These playful, cheeky, yet subtle mise-en-scènes ensure that the picture doesn’t nosedive from her oeuvre; in fact, they have an easy resonance with her intuitive, conceptually intricate, and genre-fluid auteurship.

Something unexpected: a seemingly disproportionate fraction of the runtime focuses on Varda’s installation rather than cinematic works, which I suspect might have something to do with the very apparent (at moments obnoxious) involvement of the Fondation Cartier, which has acquired a number of works from the artist’s object-orientated practice. In any case, for Varda’s most fanatical fans and newcomers alike, the doc stirs excitement about her body of work and seems to send a lucid, smiley breeze through the act of living.