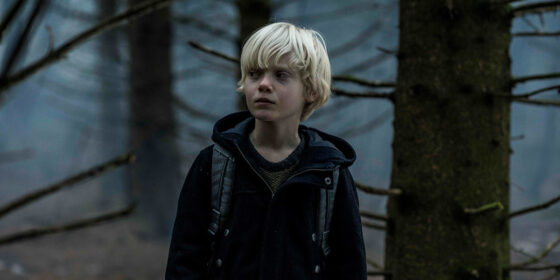 The other clog doesn’t drop for a good long time in Valley of Shadows, a half-enchanting, half-enervating Norwegian feature whose director tries to have his horror tropes and transcend them too. That it takes Jonas Matzow Gulbrandsen a while to really indicate what kind of movie he’s making could be taken as evidence of a patient, playful director who doesn’t mind gently egging his audience on—a confident first-timer—or, alternatively, simple goldbricking. For instance, it takes less than five minutes of screen time for pre-pubescent protagonist Aslak (Adam Ekeli)—who lives with his mother and a big, ominous structuring absence where his wayward older brother used to be—to wonder if a werewolf has been preying on his village’s livestock, and then the better part of an hour for him to enter the woods solo in search of the elusive beast.

No spoilers here about what happens from there, except to say that Aslak’s bold monster hunt is (stop me if you’ve heard this one before) as much about self-discovery as literal exploration. Such developments, and their attendant emotional payoffs, are not particularly novel or exciting, but the sheer lyricism of the imagery—twisted, overgrown forest floors, foggy mountain peaks, and a serene, muddy stream—gradually overwhelms the narrative pretence around it. Whether or not the aesthetics-over-content outcome is by design is hard to say for sure, but the fact is that the cinematography of Marius Matzow Gulbrandsen’s (yes, he’s related to the director) is so beautifully framed and textured that it’s possible, during the most mesmerizing stretches,  to believe that Valley of Shadows is a great debut. But, like most bad dreams (it’d be too much to call this essentially gentle, fable-like film “nightmarish”), the illusion doesn’t hold up in the light of day.