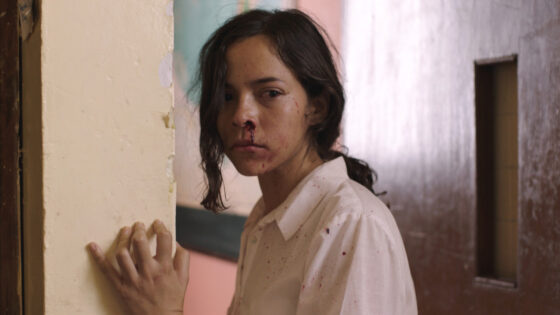 Repressed sexual impulses find a novel form of expression in Amat Escalante’s The Untamed, a genre film for people who find genre films distasteful. As in his Cannes-winning Heli (2013), Escalante’s knack for high-concept premises—there, using the family unit as a means to explore the insidiousness of violence—is undone by his obvious, brute-force execution and his indelicacy with characters, whom he routinely puts through the wringer to make a statement. This time, the Mexican family under the microscope is undone not by the drug war but by their impulsive attraction to a genderless, pansexual creature from parts unknown—our only clue to its origin is a cryptic opening shot of an asteroid in space, and it is never contextualized beyond that. The creature’s earthbound residency in a cabin in the woods activates the base sexual impulses of all around it, upending marriages already pitched on rocky ground and even giving redoubled vigour to animals, seen helplessly gyrating in the woods in what is unquestionably the film’s most indelible image.

Escalante has the grace and good sense to acknowledge his debt in creature design and dramatic schema to Andrzej Zulawski’s Possession (1981), which gets a hat tip in the credits.  It’s no Possession, but there’s a lot to appreciate here, from the muted body horror of the first act to the visual shorthand through which Escalante establishes the living deadness of his central couple’s marriage, and the carefully realized magic-realist aesthetic, where the supernatural and the alien gracefully slink through the overwhelming kitchen-sink realism. The creature’s strange physical form is kept disconcertingly familiar, blended into its low-lit surroundings rather than given dramatic, curtain-raising reveals. But Escalante’s dogged literal-mindedness makes this an incomplete Zulawski homage at best, and at worst The Untamed is as basic as its title, a joyless slog through an austere sci-fi-adjacent melodrama about the weaponization of desires unexpressed.