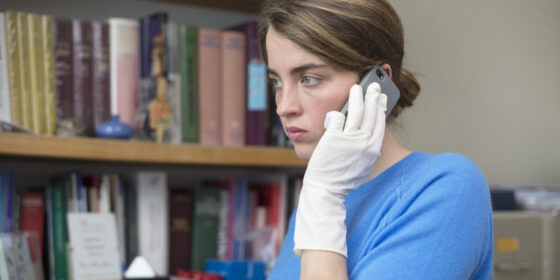 Each new film by the Dardenne brothers is soothingly familiar, in the sense that the directors masterfully recycle tried-and true-motifs. For their detractors, the Dardennes are in danger of making formulaic art films, while their equally fervent supporters maintain that, by continuing to plough familiar terrain, they are enriching an already distinguished body of work.

The Unknown Girl, while certainly competent and intermittently moving, is unlikely to convince skeptics who wonder if the brothers’ flair for socially conscious melodrama might have peaked with acknowledged landmarks such as La promesse (1996), Rosetta (1999), and Le fils (2002). Like much of their previous work, The Unknown Girl deals with questions of moral responsibility and the plight of forgotten, impoverished individuals. Dr. Jenny Davin (Adèle Haenel), an ultra-conscientious Liège-based doctor, is as hard on herself as she is on her harried intern. When she learns that her obliviousness to a late-arriving visitor might have inadvertently caused the death of a young African immigrant, her guilt compels her to become one of the most assiduous investigators since Hercule Poirot. Although Haenel’s portrayal is never less than brilliantly self-assured, the fact that the unknown victim referenced in the title remains a tabula rasa ensures that the film is rarely more than a somewhat rote exercise in liberal self-flagellation. Dr. Davin’s dedication to both her medical practice and the lives of her forlorn patients make her something of a secular saint, but the film’s cathartic twists are less well-earned than the culminating moments in the brothers’ best work.