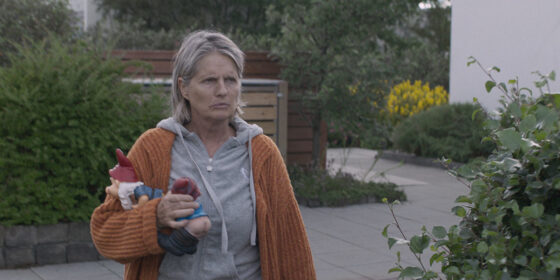 This would-be black comedy from Iceland starts out in gently grumbling Mike Leigh mode and ends up somewhere in the neighbourhood of Miike Takashi’s Dead or Alive trilogy. That may sound kind of badass, but the trajectory is never really convincing. (Ron Burgundy might opine that things escalate a bit too quickly, and while there is no trident, a pitchfork does feature prominently in the finale.) At the centre of Under the Tree is a deeply dysfunctional family. The adult son Atli (Steinþór Hróar Steinþórsson) gets thrown out of the house when his wife catches him spanking it to a sex tape he made with an old girlfriend. So he goes home to his parents, who are in an increasingly petty dispute with their neighbours over the eponymous tree. The new trophy wife next door (Selma Björnsdottir) is particularly keen on having it removed because its shade wrecks her sunbathing.

Part of the pleasure of TV shows with outrageously rotten characters (Seinfeld, Curb Your Enthusiasm, Don’t Trust the B—- in Apartment 23) is that over time, a context is created for their bad behaviour—that is, we figure out how they negotiate the world without getting arrested, institutionalized, or having their asses kicked on a regular basis. It’s just not possible to build that head of steam in an 89-minute film, so as things escalate, it’s hard to put aside the gnawing feeling that everything would cease if someone didn’t make the worst possible decision, or, more reasonably, if someone simply called the cops. That wouldn’t be any fun, but neither is a film with an empathy gap a kilometre wide and a penchant for putting innocent kids and animals in harm’s way. But none of this makes any difference: the majors will surely be bidding for the remake rights by the time you read this.