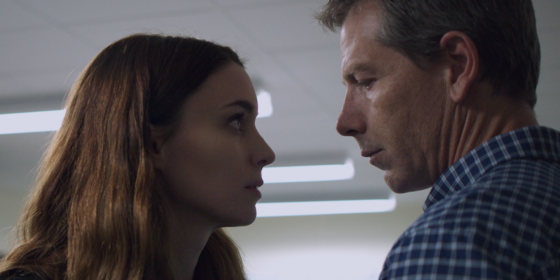 An indication of what Elle could have been if it wasn’t directed by Paul Verhoeven or led by Isabelle Huppert, Una treads dangerous territory without tact, nimbleness or reflexivity. Certain subjects require more care than others, and when representing sexual abuse on screen, there’s always the risk of trivializing its effects or turning it into a narrative device. While the conceit of Verhoeven’s film is that we can’t possibly understand what’s going on in the mind of Huppert’s character—a woman raped in the very first scene of the film—the eponymous protagonist of Benedict Andrews’ second feature, an adaptation of David Harrower’s play Blackbird, is exploited for a contrived dilemma.

Una (Rooney Mara), a hard-partying and depressed young adult, shows up to Ray’s (Ben Mendelsohn) workplace unannounced to confront him about their consensual, pedophilic relationship from years ago. After being released from prison, Ray built a new life, changed his name to Peter, and married a woman his age who doesn’t know about his past. Ray insists that he is not a pedophile, that there was just something special about Una; he recognizes his wrongdoing and still desires Una as an adult. Herein lies the film’s false ambiguity: Is Ray a pedophile? Should Una and Ray still be allowed to be soulmates now that she’s an adult? Though the film is formally bland and absurd in its final act, Mara’s performance is the main flaw: she is neither an enigma like Huppert nor able to imply the character’s ambivalence, jumping from one extreme to the next with very little credibility. The film’s main sin is that it simplifies a victim’s psyche to a straightforward “I love him/I hate him” quandary.