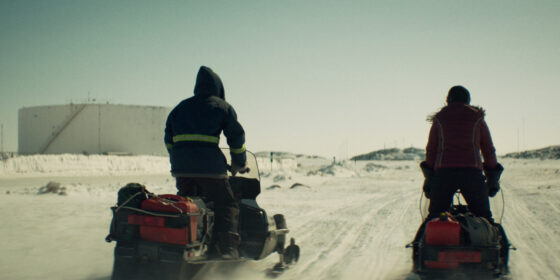 A decidedly whimsical take on amour fou, Kim Nguyen’s Two Lovers and a Bear stretches a thin premise to its limits. Lovers with daddy issues Roman (Dane DeHaan) and Lucy (Tatiana Maslany) reside in the Canadian Arctic. Supremely photogenic, as well as inseparable, the couple weathers a crisis when Lucy decides to go south and study biology at an unnamed university. Even though the inconsolable Roman’s reaction to this news resembles psychosis more than extreme disappointment, his malady is treated as just another cutesy quirk. Matters are not helped much by Roman and Lucy’s encounter with a bemused talking polar bear (voiced by the distinguished Canadian actor Gordon Pinsent, whose presence may either be an obscure in-joke or a futile attempt to add some gravitas to the proceedings). Nguyen occasionally attempts to jumpstart the narrative by regaling us with what critics love to term “set pieces.” The most notable of these protracted sequences involves a climactic reconciliation between Roman and Lucy in what appears to be an abandoned bunker. Whatever narrative frisson might have been intended in this interminable scene is neutralized by a realization that this spooky locale amounts to nothing more than empty symbolism. There’s a genuine chasm between Nguyen’s visual flair (the film features some of the most spectacular snowscapes since Ice Station Zebra [1968]) and the script’s New Age-y flakiness. In this movie’s fanciful realm, mental illness, obsessive romanticism, and  Arctic wildlife are all unbearably adorable.