Two for the Road: The Trip 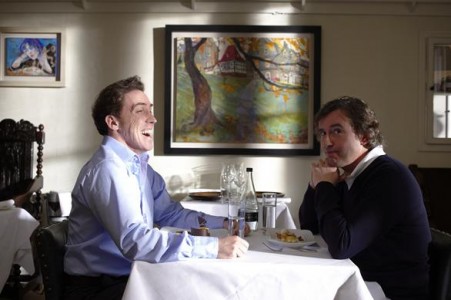 Midway through Michael Winterbottom’s The Trip, an enticing bit of trivia tumbles out of Rob Brydon’s Welsh mouth: apparently, co-star Steve Coogan (like Brydon, playing “himself”) was in the running for the eponymous role in HBO’s The Life and Death of Peter Sellers (2004), edged out by Geoffrey Rush. Like plenty of things in The Trip, it’s hard to know how this tidbit relates to reality (though a cursory Google search of “Steve Coogan + Life and Death of Peter Sellers” seems to substantiate it), but the veracity is ultimately irrelevant. What matters is that it’s brought up at all, because even this faint invocation of Stephen Hopkins’ so-so Sellers biopic colours The Trip’s naval-gazing dramedy in ways that needle a little too deliberately. Incidentally or not, Winterbottom’s film suggests a kind of alternate universe which orbits around the sun of its grumbling star: one in which it’s Steve Coogan, not Geoffrey Rush, cashing cheques for Green Lantern and unending Pirates of the Caribbean pictures while basking in the critical acclaim of The King’s Speech (2010). For if The Trip is anything, apart from a magnificently satisfying showcase for Coogan and Brydon’s effortless improvisational interplay (and persistent Michael Caine impressions), it’s a teasingly fluid play between the real-deal Steve Coogan and the alternately charming, dopey, and self-pitying “Steve Coogan” that Winterbottom allows his star to present, riffing on the thin line between Coogan’s on- and off-screen manifestations of comic melancholia and unrestrained egomania. (At one point a dreaming “Steve” is confronted by the newspaper headline “COOGAN IS A CUNT,” continued, below the fold, with “SAYS DAD.”)

The Trip is essentially a follow-up to Tristram Shandy: A Cock and Bull Story (2006), Winterbottom’s pleasingly wily film-within-a-film adaptation of Laurence Sterne’s 18th-century mock-memoir in which Winterbottom filigreed dramatic recreations of the title tome (with Coogan as Shandy’s father Walter and the kind-hearted, doe-eyed Brydon as Uncle Toby) with a behind-the-scenes “making-of” that played Coogan’s mordant wit and narcissistic self-involvement off Brydon’s impenetrable good-naturedness. In The Trip, Coogan and Brydon again reprise this refined straight man/stooge double act, Coogan smarmier than ever, and Brydon almost hyperbolically gentle. (In one scene, Brydon lapses into one of his many impressions while ham-fistedly attempting phone sex with his goodly wife, the attempted eroticism bleeding into un-saccharine tenderness.) In a last gasp to salvage a relationship with his gourmand girlfriend (Margo Stilley), Coogan organizes a restaurant tour of northern England, to be memorialized as a magazine travelogue. When she ditches him and returns to America, Coogan reluctantly calls up sometimes-chum Brydon, who agrees to tag along.

The set-up, and the existent aggro-chemistry between Coogan and Brydon, recalls Planes, Trains and Automobiles (1987), but the film alternately evokes elements of travel programs, cooking shows (in the sensuous close-ups of the extravagantly-prepared and dexterously-plated food, and conspicuous placement of the respective establishments’ names), and a Cooganized (and no less decadent) version of the Joaquin Phoenix prankumentary I’m Still Here (2010). Yet while Coogan and the star of that considerably more toxic pseudo-doc might share a reported fondness for insufflated opiates, the former’s considerably more developed sense of humour (and that of his onscreen foil) proves a tonic to what could otherwise be a tiring joust between the “real” and the put-on. Coogan and Brydon play off each other exquisitely, the latter’s diffident self-confidence unruffled by the former’s barrage of snarky jibes. (Indeed, Brydon is so incurably affable that, in keeping with the film’s Steve-centric latitudes, it’s easy enough to imagine that he’s just some obsequiously chummy projection of Coogan’s fissured bad-man psyche.) While watching two forty-something men duel with Michael Caine impressions, or riff on the solemnity of battle-hardened British historical dramas (“Gentlemen, to bed! For we rise at…nine-thirty…ish!”) might sound like something of a chore, the strain of a lot of the jokes nicely evokes the real sense of being stuck in the same person’s company for too long. Nonetheless, the periodic smacks of unaffected friendship between the two do more to absolve Coogan of his tabloid-testified sins than all his sulky onscreen soul-searching.

In the Steve Coogan emotional-mental lifecycle, The Trip has him cocooning. Between meals and long stretches of driving, Steve stalks the countryside, cell phone raised like an antennae to heaven so he can secure a signal and suffer through calls from his estranged girlfriend or agents (one wants to cast him as the baddie-of-the-week in a Doctor Who, another offers him co-lead in a US network drama called Pathological). We see him gallantly turn down a bump of coke, and place an earnest (if detached) phone call to his son. Most every morning, if he doesn’t wake up to the rustling of the previous night’s conquest slipping out the door, he’s shocked awake by bad dreams. In one such vision, a belligerent Ben Stiller (always funnier in doses) froths about how the Coens, the Scotts and the Wachowskis (“all the brothers”) are bent over backward to work with him. “I don’t work with mainstream directors,” Coogan insists to Brydon earlier in the film. “I work with auteurs.” Given that Coogan has more than a few credits the likes of A Night at the Museum (2006) and Marmaduke (2010), it’s the kind of in-joke the comes off sly enough, gesturing both to the comic’s inflated sense-of-self and Winterbottom’s own claims to Serious Artist status.

The late David Foster Wallace used to talk frequently in interviews about “cleveritis,” the disease of using formal innovations as ends in themselves. More specifically, he diagnosed the condition as “the grad-school syndrome of like ‘Watch me use seventeen different points of view in this scene of a guy eating a Saltine.’” Winterbottom is nothing like patient zero for cleveritis, but he’s come down with it in the past with the recurrent third-wall-breaking direct addresses, actors-playing-versions-of-themselves and curated cameos by real people commenting on events befalling their fictional counterparts. Worse than clever, though, Winterbottom’s recent output has been ugly and plain dull, as demonstrated by the bland romance Genova (2008) and the dead-eyed, misogynistic Jim Thompson adaptation The Killer Inside Me (2010). In light of these badly botched non-efforts, The Trip seems a revelation: painlessly light and pleasingly trifling, as if its director’s only authorial interventions were deciding when or when not to cut the Coogan-Brydon banter. Given his tendency to lapse into formal abrasiveness and vacuity, Winterbottom’s calculated subtraction of himself from the equation is welcome; were it not for the stars, the tinkling Michael Nyman score, and his name on the credits, one would have a hard time guessing that Winterbottom was along for the ride at all.

Early in the film, as he and Coogan set out on their amble through England’s variously wild and windy moors, Brydon rather crisply sets the tone for the film: “It’s 2010,” he says, “It’s all been done before. All you can do is do something someone’s done before and do it different or better.” Winterbottom hasn’t bettered the elegantly enfolded meta-fictional gestures of Tristram Shandy, but he has done it differently, and given all the pertinent signposts he plants to signal his cleverness (without succumbing too ruinously to his sporadic jags of cleveritis), The Trip winds up a modestly successful experiment. More, in his luxuriant fly-on-the-wall framing of Coogan and Brydon’s comic back-and-forth, Winterbottom has coolly matured out of mere cleverness and has begun to edge closer to real ingenuity.