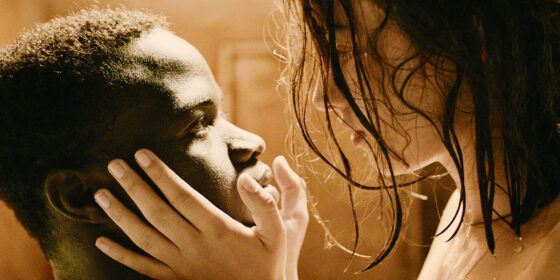 The meaning of Twin Flower’s title is revealed roughly 40 minutes in: preventing teenage trainee Anna (Anastasyia Bogach) from splitting a double-stemmed flower, a florist insists the plant’s parts are a rare thing that must stay together. As a unit, Anna and the film’s other teenage protagonist, Ivory Coast refugee Basim (Kalill Kone), are similar: two fragile things brought together by chance and stronger as companions in navigating the world. The flower comparison is clumsily emphasized further when migrant trafficker antagonist Manfredi (Aniello Arena), who is pursuing Anna across Sardinia for reasons teased in flashbacks, later interrogates the florist and tells him he’s mistaken “to feel sorry for delicate things.”

Anna is left dumbstruck by an unseen traumatic event, with the film opening on her fleeing Manfredi. Despite operating as a mute, she has better success securing gainful employment than Basim, whose lack of paperwork leads him to grudgingly pay his way through late-night prostitution. As a plot device, Anna’s silence can vex, but the strongest scenes revolve around the pair quietly exploring the locales of their hideouts without the need for words. One tender, dialogue-free sequence sees Anna join Basim in the bath of the house in which they’re squatting, leading to a nude embrace and, eventually, a kiss. This scene is emblematic of director Laura Luchetti’s approach, and her nonprofessional actors’ skill with using body language alone to convey deepening trust. It’s a shame when the stale thriller narrative butts back in.