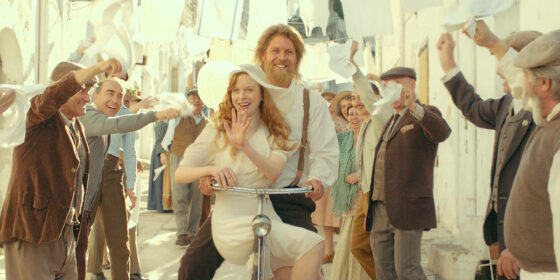 What is the aesthetic advantage of whimsy, especially in a work presumably meant for an adult audience? These questions preoccupied me throughout Mike van Diem’s Tulipani, Love, Honour and a Bicycle, a primary-coloured fable recounted to Anna (Ksenia Solo), a young woman who travels from Montréal to Italy after her mother’s death and discovers the story behind her true parentage. Told in flashback, the film tells the story of Anna’s biological father Gauke (Gijs Naber), a Dutch expat who travels to Puglia on a bicycle, who charms the locals with his strange accent, starts a thriving tulip farm, and butts heads with the local “legitimate businessmen” over protection money.

The whimsy comes with the various embellishments (like kung-fu skills and a batch of rapidly-growing tulip bulbs) that are added to the tale of Gauke by its various storytellers. But to what end? By the film’s own admission (a clunky punchline that ends the film), there’s nothing better than a good story. But that only works if the story is at all noteworthy in the first place, and Tulipani, Love etc. mistakes whimsicality for significance. As well, an underlying thread of the film is the growth of Anna’s self-confidence, as she goes from frumpy to hot-all-along thanks to some gradual wardrobe changes. But there’s little to connect this ongoing character development to her father’s fanciful exploits. Instead, everybody was kung-fu fighting.