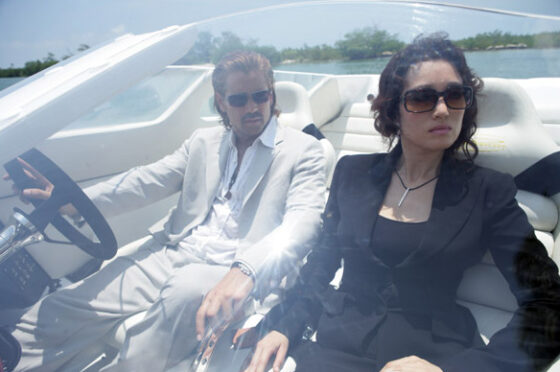 [Vulgar auteurism] is one of the defining traits of latter-day cinephilia, with whole fleets of past and present studio craftsmen, from the competent to the questionable, being elevated high above their stations via tendentious interpretations of thematic consistency and a specious formalism that welcomes any manner of ostentatious display.

[…] The directorial “vision,” that narrow, jealously cultivated, and often speedily fallow patch of habitual tropes, is an intrinsic part of the seemingly irresistible packaging impulse that marks so much of contemporary American narrative film.

[…] The distinctive feel and tone, the now-standardized thematic preoccupations, the suggestive use of new media, and the increasingly farcical gravitas of the proceedings make [Mann’s] films both instantly readable and self-consciously rarefied, thus rendering them wide open for imaginative (or fantasized) critical extrapolation.

[…] the challenge with a filmmaker like Mann, whose circumscribed but genuine artistry has been developed wholly through commercial cinema, is not to blind ourselves to the commerce but to determine how it interacts with, infuses, the projects he undertakes…. even as Mann has increasingly muted the downstage melodrama of his films, seeking to blend it into the evanescent textures that surround them, his inescapable reliance on these generic tropes dictates that his efforts will always remain firmly lodged within the boundaries of convention. As The Insider ably demonstrates, these boundaries can, when utilized both imaginatively and cogently, yield first-rate serious cinema. But to defy them in means while doggedly abiding by them in essence is neither a subversion nor a culmination of the popular medium, but an eccentric tangent straggling away from it.

[…] This is another of the regrettable legacies of vulgar auteurism[:] Many of the old studio hands to whom Mann is often compared honed their mastery with ostentatious grittiness, nihilism, and violence as a substitute for the fully achieved works they were so often contractually (or for some, intrinsically) prevented from even attempting. More than any other nation, the majority of great American narrative cinema past and present rests upon evocative fragments rather than fully achieved works. And where the cinephilic celebration of these fragments once constituted a bold challenge to staid and respectable notions of artistic achievement, nowadays these precedents are all too often evoked to inflate the half-baked or stillborn products of a considerably freer climate[.] The special pleading that so often enters into the critical parsing of contemporary American filmmakers finds less and less justification as the dedicated cinephile’s access to world cinema continues to expand. [Italics added.]