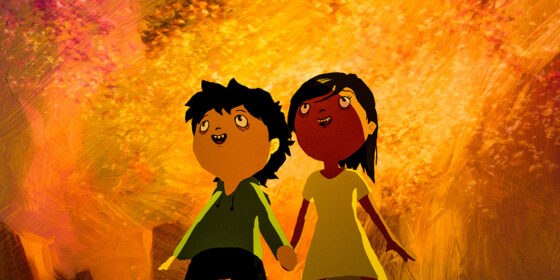 Here’s a film that’s virtually guaranteed to snag one of those fourth or fifth slots in the Oscar race for Best Animated Feature: those films that almost nobody has heard of even by the time of the broadcast and that are put in place to serve as also-rans against that year’s big-budget Pixar or DreamWorks project. Such films are often a joy to discover—however, as artisan-based global animation goes, Tito and the Birds is a rather uninspired entry, an allegory so blatant in its intent that it’s difficult to imagine who’d find it satisfactory. Older kids and adults will undoubtedly find it far too simplistic, and younger children will be too bored to care.

In a vaguely dystopian city rendered with Expressionist brushstrokes of goldenrod and pea green, fear itself has become an epidemic. People don’t want to go outside, and once the disease hits its critical mass, the victims shrivel up and turn into human lumps that sort of resemble Cartman from South Park. Unsurprisingly, the epidemic is being fomented by a wealthy right-wing capitalist, who is using his news network to instill terror in the masses, all the better to drive them into his high-security domed communities. Tito, for his part, is hoping to continue his scientist father’s work, trying to decipher the language of pigeons: he believes they have a message of warning for the humans, one that could possibly reverse the fear epidemic.

There’s not a great deal of nuance at work here, and Tito is mostly interesting for its subtext. It’s largely about father-son relationships, and certain sexist and classist assumptions are not really interrogated. It’s easy to give Tito a symptomatic reading in light of the recent Dilma ouster, given the film’s sense that only benevolent patriarchs can save Brazil from itself, as well as its frequent refrain, “Where are the authorities?” It all ends with a nominal message of unity, but by this point it’s hard not to feel as if social action is strictly for the birds.