By the Time It Gets Dark (Anocha Suwichakornpong, Thailand/France) — Wavelengths 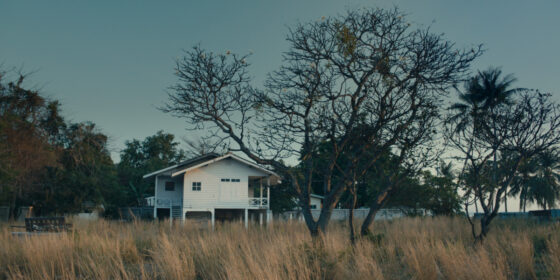 To call what happens in By the Time It Gets Dark a “plot” is to do it a disservice of sorts, such is the beguilingly self-reflexive nature of Anocha Suwichakornpong’s becalmed, trippy, historically conscious fungus of a film. That the film strays from its central conceit—the Thammasat University massacre of 1976, here “re-enacted” by a well-intentioned director trying to make a film about one of its leading activists—is a gambit that Suwichakornpong handles with an elastic but formally cohesive schema of detours, longeurs, and non-sequiturs. This would all seem to put one off the scent of a horrific tragedy were it not for the fact that the cyclical, tangential essence of her narrative threads speaks to a broader humanist concern, as well as the current climate under a similarly suppressive regime.

A filmmaker retreats to a country home to conduct interviews with a former leader of the student movement, under the pretense that she is a “living history,” but any such lien on the past becomes undermined by the suppleness of the present, instances of eternal recurrence, and intervening details that go unnoticed by more vigilant forms of attention. At one point, the director within the film tucks into a loaf of bread only to realize it has gone mouldy, at which point the narrative embarks on a discreetly digressive course as if to distinguish whether such forms of change signify rot or exquisite decay. A mushroom hunt, naturally, turns up some apparitions, and consequently wrests authorship from any central source (you sense even Suwichakornpong herself has stopped guiding the ghost boat and lets it float where it may). A seemingly unrelated sequence in which a tobacco factory is inhabited with documentary-like curiosity affords the film an apt metaphor: verdant leaves are sorted, gathered, and oven-dried, to emerge brown and brittle but richer for consumption, “cured.” The notion extends to a temporal dimension of the film in which the past/present divide is sutured by an ongoing tense; everything is poised in a state of continuation.

By the Time It Gets Dark is haunted, or possibly graced, by the recurring presence of a young woman appearing in many guises, typically in mundane labour, serving meals or cleaning bathrooms, a near-silent witness to the film’s more characterological reality. Contrasted with the auspicious life of a publicly adored pop star (put through the paces of some bad music videos), the view from the margins assumes an increasingly legitimized location for enlightenment. The monastery and the discotheque become inseparable, both natural and neon light bearing down on us with equivalent intensity. The film’s original title, Dao Khanong, refers to uncharted territory on the outskirts of Bangkok, but its prosaic English offshoot suggests a twilight of both moviegoing and cinema itself, where cinematic memories can be, while not entirely forgotten, composted for future consideration. Even the pixel will become, someday, pastoral.