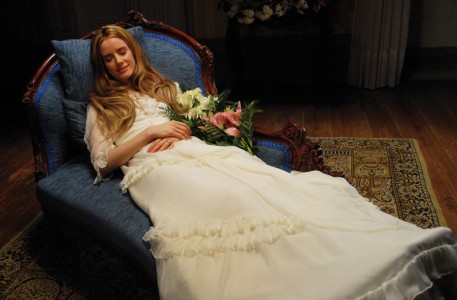 There are, needless to say, certain old saws that we as critics rely upon far too often. They can help us get somewhere in a hurry, make a point or join a gap in an argument so that we can move on to where it is we really want to go—and this can be useful when we’re forced to fend off counterarguments or attacks that are equally as reflexive as the ones we’re invoking. For example: “So-and-so just makes the same film over and over again.” To which we might reply: “No, a great master devotes him or herself to a lifelong aesthetic program, continually refining it, exploring it from every possible facet. You could say it is all one big film.” The first statement needs to be knocked down, because it is not a real criticism. It’s a manoeuvre against thinking, what Roland Barthes once called “deaf and dumb criticism.” (“I’m a professional film critic, and ______ bores the crap out of me, so guess what? You punters really don’t even need to bother. Thou art vindicated!”) But the retort, while serviceable as rhetoric, isn’t particularly useful as criticism either. It doesn’t really help us see or hear.

I speak as someone who has relied too much on this One-Big-Film idea a bit in the past, and who, for the twelve or so years that I have been watching the films of Manoel de Oliveira, have too often allowed that idea to structure my deep appreciation of his work. In certain ways, this has prevented me from being fully attuned to how his films have changed in recent years, how bizarre, unruly aspects of them that struck me as “anomalies” (in an almost Thomas Kuhn way: “outlying” facts that I couldn’t square with “Oliveiraness”) were really collapsing my dominant interpretive paradigm. For a long time, I understood Oliveira’s work as representing, first and foremost, a kind of modernist joust with classical literature and theatre. The films that shaped my understanding of his cinema—No, or the Vain Glory of Command (1990), Valley of Abraham (1993), Voyage to the Beginning of the World (1997), Inquietude (1998) and Word and Utopia (2000)—tended to employ a text-laden, flatly declamatory style, oftentimes delivered almost directly to the camera. Positioned somewhere between the stripped-down neo-Baroque of Raúl Ruiz, the materialist readers’ theatre of Straub-Huillet, and a colour-saturated variation of late Rossellini, these films seemed intent on pulling apart everything they ostensibly aimed to harmonize. Thick literary language and theatre’s unadulterated physicality were, ultimately, inhospitable to cinema, resulting in an almost Greenbergian separation of the elements, a suspension and, indeed, a thoroughgoing inquietude.

But then Oliveira’s films included elements that were unavoidably “cinematic,” by any meaningful definition, and I wasn’t sure what to make of them. Were they just offhanded jokes, sidetracks that had nothing to do with the “great project”? It was easy enough to discount the lovely I’m Going Home (2001) as a unique semi-middlebrow one-off, Oliveira trying his hand at a more stringent version of the typical European art film. (It even begins with Michel Piccoli onstage in a very Oliveirian Ionesco production alongside Catherine Deneuve and Sylvie Testud, the theatrical “scene” from which personal tragedy extracts him.) But if I’m Going Home “doesn’t count,” what of Portuguese musician Pedro Abrunhosa’s vacant, behind-the-shades “performance” in The Letter (1999)? The discotheque fire in The Uncertainty Principle (2002)? And pretty much the entirety of Belle toujours (2006) or A Talking Picture (2003)?

I began to wonder what I’d been missing by glomming on so quickly to a master key for interpreting Oliveira’s oeuvre. (And what do we miss when we similarly reduce Straub, Iosseliani, or the most prevalent case these days, Hong Sang-soo?) This isn’t to say that I’d been entirely wrong about Oliveira’s methods before, or that he stopped making “talking pictures” in that original sense. (Magic Mirror, from 2005, is underrated, but does feel more like an early-‘90s effort.) But what I did discover, upon revisiting The Strange Case of Angelica, is that my prejudices regarding what Oliveira films are, or should be, threw me off the track. I failed to recognize this film for what it is: both an open text and a cautionary tale, a work that gestures toward many possible levels of social and aesthetic inquiry but also scans on its surface like a lost entry from the Brothers Grimm. First of all, Angelica is a ghost story. The Romantic tale of love beyond the grave is one of the most basic storytelling templates there is, of course, but one of the often unacknowledged effects of ghosts within a narrative space is the introduction of multiple timeframes within a single diegesis. Ghosts are, after all, “the past” slicing through to the present, and one of the key aspects of Angelica, long before any ghosts even appear, is Oliveira’s creation of a highly unstable timeframe.

In the middle of the night, a Catholic family requires the emergency services of a photographer. The local professional is unavailable, but they are referred to Isaac (Ricardo Trêpa), an amateur enthusiast with darkroom capability. The neighbours call him a “Sephardic immigrant,” and the emphasis on Isaac’s Jewishness, along with the rather anachronistic specificity with which it is denoted, seem to place us in the late 19th or early 20th century. However, when the family sends a car around to pick Isaac up, it’s a contemporary SUV, complete with a glowing electronic dashboard. Oliveira gives us a very deliberate shot of the vehicle rounding a traffic circle in the night, with classical statuary and a fountain in the foreground. This otherwise banal gesture—a car moving through Old Europe’s public face—becomes an ambiguous time travel, out of known history and into the spirit world.

Isaac’s assignment is to shoot funereal images of the young, deceased Angelica in her final repose, prior to her burial. (Pilar López de Alaya, an actress perhaps best known for having been stalked in José Luis Guerín’s In the City of Sylvia [2007], portrays this exquisite corpse.) As he looks through the viewfinder, the dead girl appears to come to life again, opening her eyes and smiling at him. Naturally, Isaac is rattled. This happens once again in the makeshift photo studio he has arranged in his boarding house bedroom: while working on developing the photo, the dead Angelica’s image comes to life, with a smile so pure and benign as to allow for any possible projection upon it—angelic beatitude or doe-eyed virginal expectancy.

My initial experience with The Strange Case of Angelica was, in a word, off-putting, although I did find much to admire and even enjoy about this seemingly simplistic tale. Oliveira’s dip into “special effects,” in the form of the lo-tech superimpositions of the ghostly Angelica, was as much of a shock to me as the disco fire or the various odd deployments of John Malkovich in the earlier Oliveira films. (The use of cobalt blue spectres in the Méliès idiom, actually, reminded me very much of Kenneth Anger’s Rabbit’s Moon [1950], another tale of love-struck madness.) But I found myself mentally slotting Angelica alongside I’m Going Home as another cul-de-sac off the “main track” of Oliveira’s primary artistic trajectory. It moves at a mid-tempo pace, drawn in part from the Chopin piano works that comprise its soundtrack. It also contains a relative dearth of extended dialogue sequences. (Even the boarding house breakfast, with its discussion of anti-matter and “the seven mosquitoes of the apocalypse,” is brisk compared to some of Oliveira’s showstopping colloquia.) Angelica seemed oddly accessible, but also somehow empty.

What I failed to observe, however, is that Angelica is every bit as concerned with the problems of cinema as Oliveira’s more theatrically inclined works, but explores them through more specifically visual means. In fact, this may be Oliveira’s most sustained meditation on the cinematic medium itself, apart from other aesthetic considerations. We began to see intimations of this direction in his previous feature, Eccentricities of a Blond Hair Girl (2009), which staged its talkiest, most static passages on a moving train, combining frank verbal delivery with the raw power of cinema’s originary magic. But with Angelica, we find the old questions regarding spirit photography and the camera’s alleged truck with the supernatural brought forward, onto the Mulvey/Lacan spectatorial axis. Isaac’s desiring gaze is an animating one, one that haunts his dreams and turns his waking life into a kind of haunted paralysis, simply awaiting the next visitation. (Isaac keeps his poor landlady awake with his nightly moaning and yelling, implying that this para-Freudian subject is in the throes of nocturnal emissions.)

But Isaac is the “enunciator” of the images that haunt him, is he not? Oliveira shows us the photographer becoming enslaved by his own images, and the repeated sight of Isaac removing them from the stop-bath and hanging them on the drying line, one “frame” after another, alludes to photography “becoming” cinema, the “dead” image coming to life and overtaking its maker, becoming more real than the world from which it was extracted. But these photographs are not a sequence. Some are of the dead Angelica, and others are of the team of vineyard workers who sing and plow and harvest across the road from the boarding house, men working in what Justina the landlady (Adelaide Teixeira ) dismisses as “the old-fashioned way.” “That’s why I like it,” Isaac replies. Before his heartsick lunacy takes over, we see Isaac cross over into the field like a good ethnographer, documenting this vanishing mode of labour. Each of the workers crosses in front of Isaac, stops, and poses for his “official” portrait, and these are the images that hang on the line alongside the shots of Angelica’s earthly remains. 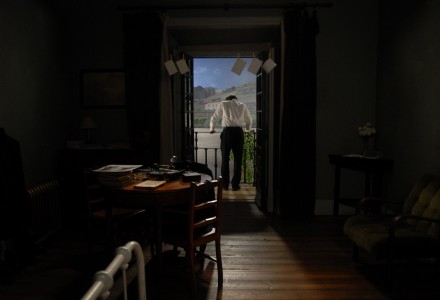 What does this tell us? Isaac can be seen as being locked inside a classically modernist economy of images, using his camera to try to read past the surface of things and acquire a representation of authentic moments, “spirits” of the temporal world, before they fade. He fixates on Angelica’s image, much more so that her own family does. They wait for him to deliver the proofs while he hoards them, investing an inordinate amount of attention on the assignment. For the Catholic family, of course, the photos would be merely a reminder, a devotional object, to gesture toward the departed soul of their beloved wife and daughter. Isaac, whose Jewishness is very much made an issue at the start of the film and as he enters the family’s house, has instead fallen prey to the graven image, which sets him on the dangerous path of artistic modernism and of cinephilia in general.

In the end, The Strange Case of Angelica is a film that strikes me as double-coded. It does exist denotatively as a parable of amour fou in which the outsider allows himself to project his fantasy life upon the passive screen of the inert object. In this regard it falls in line with the classical literature of the Fantastic and the Uncanny, from “Sleeping Beauty” and Pygmalion to E.T.A. Hoffmann and right up to Almodóvar’s Talk to Her (2002). But it is also quite clearly Oliveira’s ironic consideration of the cinematic apparatus and the deeply irrational desire that it instills in us. Before the start of cinema proper, both Méliès and Étienne-Jules Marey were exploring motion study, but only the former felt the need to reconstitute motion, before a live audience, after breaking it apart. Marey, for his part, wondered why we should work to replicate what we can already see with the naked eye. Because Méliès knew well in advance what Isaac discovers to the point of insanity: only the cinema can allow us to live forever inside the temporality of another’s death.

The Strange Case of Angelica opens May 13 at TIFF Bell Lightbox.