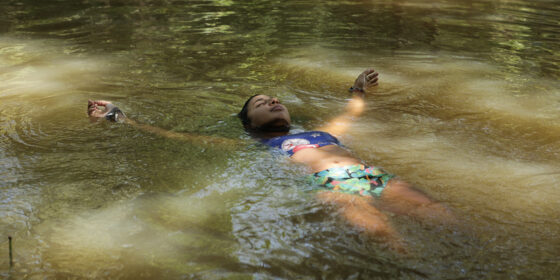 The feature directorial debut by Silvina Schnicer and Ulises Porra Guardiola’s centres on matriarch Rina, a woman in her sixties who is returning to her rundown family home to stage a sort of family reunion. Among her guests are an estranged son whose help she has enlisted in maintaining the family land title as developers creep in, and her younger friend Elena, who has her own family and a few guests in tow. The foliage of the Tigre Delta island presents a transfixing, often sinister setting as the ensemble grapples with desires, vulnerabilities, and longstanding tensions that test the integrity of familial identity.

It may be tempting to draw comparison between Tigre and La Ciénaga by the directors’ countrywoman Lucrecia Martel, which sees two matriarch-headed families leisurely live through their respective kinks in small-town rural Argentina. But it’s the lineage-obsessed narrative in fellow Argentinian Milagros Mumenthaler’s more recent The Idea of a Lake to which Tigre bears a more striking thematic resemblance, with absent patriarchs propelling the drama in some part. While Tigre’s missing father figure is attributed to old-fashioned familial dissolution rather than the disappearances of the Dirty War, as in Mumenthaler’s film, the generational trauma courses in similarly disturbing ways here, with the film’s most disruptive moment providing haunting context to the absence of Rina’s co-parent. Tigre begs us to consider what it means to be preoccupied with the significance of material markers of legacy when the corporeal and relational facts of one’s lineage remain obscured.

That’s not to discount or decentre the women of Tigre’s story; in fact, the film’s engaging, mostly female characters are its highlight, their rich inner lives and lived histories enchantingly carried over into dialogue and interaction. Schnicer and Guardiola attempt too much at times, following narrative threads that feel awkwardly punctuative and draw one away from the film’s emotive undertow. Tigre’s basic dramas are enough, shaping a story that drives toward something grander than the slice-of-life we may mistake it for at first.