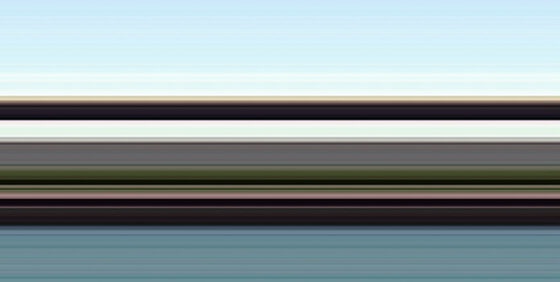 Many a Swan (Blake Williams, Canada)

Filing into the familiar (and familial) cinema space of Jackman Hall for the inaugural installment of Wavelengths 2012, devout patrons of the programme were each handed a pair of anaglyph 3-D glasses framed in rectangles of bright white cardboard, for use during the first ever 3-D presentation at Wavelengths. At once nostalgic, whimsical and somewhat capricious, the plastic-wrapped objects sat in everyone’s hands like mysterious little treasures, and would act as a tool of transfiguration in the dark. In a programme all about the reproduction and contagion of images, the audience themselves would soon evoke a double-image: that of another scene of another audience from another 3-D premiere, which has to some become the metonymic representation of Debord’s The Society of the Spectacle (1973), thus signalling the beginning of this ride through an assemblage of baroque, chimerical (mostly) digital planes in an exploration of what feels like a last mythical order.

German artist Thomas Demand’s newest work, which provided the programme its eponym, was also its opening. Continuing Demand’s method and process of creating ingenious, uncanny, and playful trompe l’oeil vignettes via meticulously constructed, three-dimensional 1:1-scale cardboard architectural models, the 100-second-long video derives its mise en scène from a viral Youtube clip of footage taken from a surveillance camera inside the ocean liner Pacific Sun, which captured the vessel’s vacillating motions and violently undulating contents (tables, chairs, office supplies, kitchen provisions) as it was hit by stormy waters in the Tasman Sea. With its fixed position, the surveillance camera gives the moment of disaster the impression of being released from gravity and time, a cacophonous symphony of catastrophe that partakes of a wholly accidental levity and absurdity.

Recalling Debord’s maxim that “In a world which really is topsy-turvy, the true is a moment of the false,” Demand’s electrifying “remake” of this moment of disaster takes place in an eerily hyper-realistic single shot that consists of 2400 separate frames, with every surface and item from the video recreated in paper carbon copy. Demand and his helpers “scripted” each minutia of the set for frame-by-frame animation to remap every object’s careening path across his double-space. In this process of bringing forth an invisible order to chaos, Demand cited in an interview that each day, invisible tremors or micro-earthquakes would shift his painstakingly precise set by millimetres, threatening the order of his crafted disaster (and this, ironically, after he had moved to Los Angeles for its supposed “stable climate”). The fragile existence of the paper set is as precarious as the Pacific Sun in the Tasman Sea, and is finally destroyed after the filming process by Demand himself—acquiescing, finally, to catastrophe, and in the final image collapsing the border between the physical and the digital by making them inextricable.

The conflation of digital planes in some of the early chroma-key images signalled the first steps towards the baroque digital reality which saturates this programme In 21 Chitrakoot, Shambhavi Kaul resurrects images from a popular 1980s Indian mythological TV show into something that resembles a fractured, disjunctive weather broadcast from an ancient, abandoned mythological utopia, a simultaneous journey through a cartographic projection and the landscapes they describe. In this texel-zone, free-floating mystical symbols languish like paintings on a cave wall, as forgotten and obsolete as the technology which creates them, yet somehow evocative of some unknown, distant New Babylon.

Deeper into the Cave, the anaglyph glasses go on for the shift from 2-D to 3-D—a subtle intervention that once again calls attention to the physical and tangible. Aptly, Blake Williams’ Many a Swan is a tonal, lyrical ode to the late pioneering origamist Yoshizawa Akira, who invented an intricate notation and mapping system for origami-folding. Matching Yoshizawa’s masterful exploration of the malleability and mutability of space and material in his work (note his famous “wet-folding” technique) in a sort of inversion of Thomas Demand’s process, Williams ventures to merge light with screen; as if guided by Yoshizawa’s phantom maps and arrows, folds and pleats, the landscape of the Grand Canyon is presented as a 3-D origami projection, engaging in a play of shifting horizons and finally taking flight.

Two recent Ernie Gehr works glide towards the last stop. Continuing Gehr’s eschewal of celluloid in his recent works, Departure, made in 2012, and Auto-Collider XV from a year before, are both part of an ongoing digital series that explore the artist’s continuing themes of transit, traffic and motion. Always journeying towards the higher image behind the merely visible, the three-part, 22-minute Departure is a dreamlike train ride that transmutes landscapes into elusive hallucinations. On land but still weightless, Gehr fixes his shot out of the window of the moving vehicle and waits for the destitute landscape to transform itself; it is the sight of speed, no glasses needed. If any of these fragile images (or their copies) were ever lost and rediscovered, entropic and decayed, they might play like Auto-Collider XV. Liquid-alloy and sand palettes shift and slide like infinite lines traced around the equator, in hyper-abstraction and serene velocity, with traffic noises that sound far distant from this world. It seems like the only way this voyage could have ended.