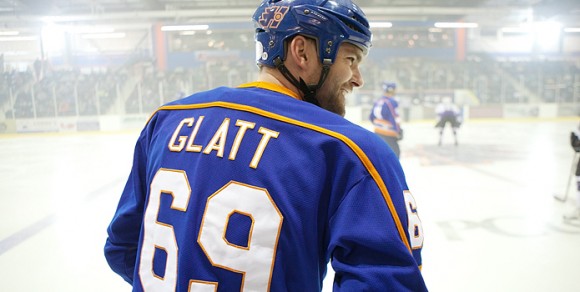 A bloody ballet of hockey violence that, gracefully, never gets too balletic, Michael Dowse’s latest drops the gloves on neutered, toothless hock-u-dramas of the Score, Breakaway etc. variety. As brawler Doug “The Thug” Glatt, Seann William Scott further elbows his way out of typecast wincing douchebaggery, playing his bouncer-cum-hockey-brawler with a sublime, unruffled dopiness that defined his career best turn in David Wain’s Role Models. Doug’s real gift is his ability to take a punch, weathering flurries of hooks and uppercuts with grinning detachment: the picture of the tender(ized) meathead. As Doug’s rival and elder gladiator Ross “The Boss” Shea (humiliated in the wake of a recognizably McSorleyesque slash at another player’s skull), a grizzled, Export A-chuffing Liev Schreiber is similarly magnificent. Dowse’s direction is adroit, the action as brisk as the deployment of jerk-off jokes, homophobic snipes (though Doug’s brother is gay, equipping the script with its requisite escape hatch), and other doses of disposable, appropriately locker room-ish humour. This is the kind of brute, bad-mannered filmmaking that Dowse has always excelled in. Here, though, it serves a picture with more palpable commercial prospects, at least domestically: Goon is scrappy enough to take out the ne plus ultra of hockey cinema, George Roy Hill’s Slap Shot, in a raw fit of patricidal rage. 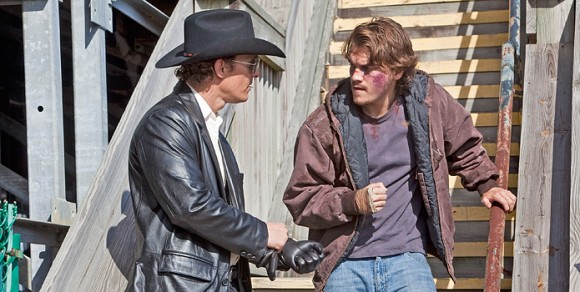 It was a dark and stormy night, and then Gina Gershon’s bush filled the screen. The former Crystal Connors’ unforgettable, pelvis-first entrance into William Friedkin’s return-to-return-to-form territory—scripted, like its predecessor Bug, by the great bugnuts American playwright Tracy Letts—is merely the first in a series of sweaty, hostile and funny manoeuvres. The casting of the Lincoln Lawyer himself as a swaggering, sociopathic Dallas cop/assassin-for-hire is inspired, with Matthew McConaughey filtering his mad-dog act through an oddly loveable Southern courtliness. It also helps that he’s an almost impossibly sleek screen presence: fifteen years after he failed off the bat as the next Paul Newman, McConaughey has grown in physical (if not actorly) stature into a strapping cartoon movie star. As the gutter-sniping mongrel clan who are ultimately sorry for bringing him in to kill off their nicely insured (and crucially never-once glimpsed alive) matriarch, Gershon, Emile Hirsch, Thomas Haden Church and the feline Juno Temple all have their moments.
Letts’ dialogue is plenty pungent (“are you done fumigating the gates of Hell?” says Church to Gershon as she applies perfume before a funeral) and Friedkin’s direction is frequently electric. If Killer Joe is finally a little less than Bug, it’s because its Tennesse-Williams-on-meth contents are more carefully self-contained. Where Michael Shannon and Ashley Judd’s spiralling madness and paranoia seemed to connect to something lurking out there in the larger culture, the psychodrama here is neat and tidy even as the surface action gets dirtier and more lurid (you’ll never look at chicken wings the same way again). Killer Joe is the Hirsch character’s rampaging id, acting out all his secret homicidal/incestuous desires. It’s not hard to understand, and it’s finally not all that original. But for bruising, full-contact entertainment, this will do—and then some. 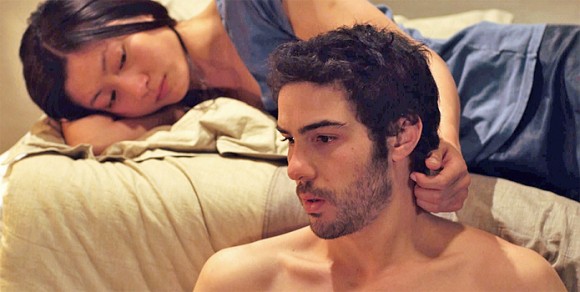 Love and Bruises finally offered me a chance to test a theory: that director Lou Ye can only find the cinematic freedom he needs by dropping the politics overlaying his recent films (Purple Butterfly, Summer Palace, Spring Fever) and just shooting the sex. Well, he shoots the sex all over Love and Bruises, and my theory proved very, very wrong; there’s not a lot of freedom here, except that of the male fantasist. The sexual politics underlying Lou’s work are, how shall we say, problematic. The female character, Hua (Corinne Yam, deliberately inexpressive) loves macho inarticulate Mathieu (Tahar Rahim, convincingly brutish) precisely because he abuses her, forces her, cheats her, pimps her (to an even more violent rapist-friend who serves, I suppose, to make Mathieu seem less repellent via some kind of nasty moral triangulation). She also cooks and cleans, between frequent bouts of fucking that are shot far too tamely to hint at the kind of feral circulation of sexual desire that might account for the persistence of the couple’s relationship.

D.P. Yu Lik-wai is a great shooter, and his gritty Paris (and tatty French countryside) are refreshingly lacking in cinema-Paris fakeness. But every time his mobile camera tries to catch a strikingly illuminated face, offering a door to deeper character, Hua and Mathieu offer nothing. The fact that Mathieu is a working class Parisian resentful of Hua’s bourgeois intellectual privilege adds something; the fact that he and his violent buddy (a superbly malevolent Jalil Lesper) are presumably French of Arab origin makes the film’s post-colonial allegorical possibilities rather more complex (and potentially noxious) than the straightforward schema Lou might have used: white French guy sexually abusing a Chinese woman into love and subservience. The story’s late, weird turn to Beijing depressurizes the film, like a balloon rapidly losing air. But it does offer delightfully unexpected glimpses of my pro-democracy intellectual professor friends at the Beijing Film Academy. So maybe Lou really can’t stay away from politics after all. 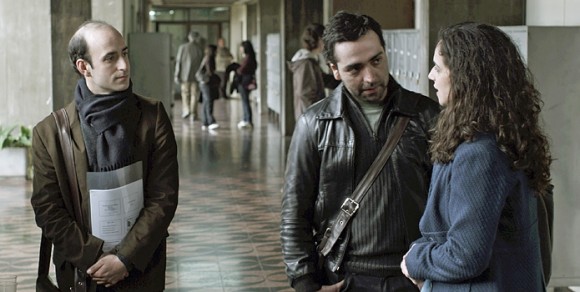 Roman’s Circuit is a quasi-scientific, uber-academic, existential memory trip coolly and allegorically served up by Chilean debutant Sebastián Brahm, in which balding and soft-spoken Roberto Roman (Cristián Carvajal), a specialist in the field of “cortical migration theory,” returns to Santiago to literally defend his pioneering thesis on memory, ostensibly in the university laboratory but ultimately in the lifeless corridors of office, home, and hotel. In other words, lone man excels in theories of lived experience but isn’t exempt from the respective vicissitudes of his labour, as his research on the migratory essence of memory collides with his own shifting experience of events, the personal and professional becoming inextricably bound—offering a prime occasion for Brahm to fracture the narrative into atemporal units, that it may mimic memory’s unfixed position (and reveal how subjectivity is causally formed).

Seems though that Roberto (who lives at home with his mother) and the film share a certain fate, of their endeavours being worthy in theory alone. Roberto’s paper on “extended maintenance in working memory inducing migration of neural correlate of items in episodic memory” is doomed to abstraction, absurdly so. Brahm attempts to graft such jargon and its attendant behaviour onto the social realities of professional and romantic rivalries, but the two threads fail to illuminate each other, in spite of references to Kafka and Pinochet that suggest the futility of remembering or the perils of amnesia. Mannered toward a desired effect of sci-fi-ronic dread, Roman’s Circuit is no more conductive than a bad day of Borges. Better to stick to your Bergson instead.