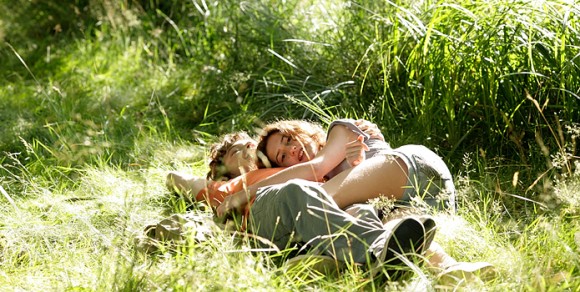 Young love, Paris 1999. Surprisingly, there is no moratorium on the subject among French directors, not even the youthful Mia Hansen-Løve, who at 30 has three films to her credit that exhibit maturity beyond her years. Loosely autobiographical, Goodbye First Love is no exception to the genre, but perhaps deceptively so. The contours are easily recognizable: young Camille (Lola Creton) falls for older boy-on-a-bike Sullivan (Sebastian Urzendowsky), their affair culminating in a summer idyll at her parents’ country house. The ever-itinerant Sullivan goes off travelling in South America, leaving hopelessly romantic Camille hostage to her mailbox, naturally melancholic and increasingly desperate. Four years on, Camille appears to have healed the wound, her hair trimmed into a Seberg cut, trying out for jobs with Air France, and “discovering” her passion for architecture (perhaps an attempt to imaginatively rebuild the empty house in which her first love contained her), albeit a passion abetted by the seduction of recognition by an older teacher, with whom she soon develops a practical but less romantic relationship.

So, success transcends heartbreak. We move on. The sentiment isn’t enough to hinge a (non-psychosexual) drama on, until of course Camille’s first love reappears in Paris. Whether their original love is unassailable becomes a narrative concern, though Hansen-Løve treats it all less like a hot coal and more like a fedora lost in the breeze (the Proustian object that comes to our attention but never lyrically returns to Camille). Herein lies the quiet force of the film, in its evocation of a parallel slipstream of time that may even be indifferent to its heroine, who seems to mature hazardously, wondrously before our very eyes (Lola Creton will be the next pouting-faced star of French cinema). Goodbye First Love plays like an old Françoise Hardy song, its lachrymose-by-numbers shape belying an ineffable sorrow of time passing, of love’s un-return. 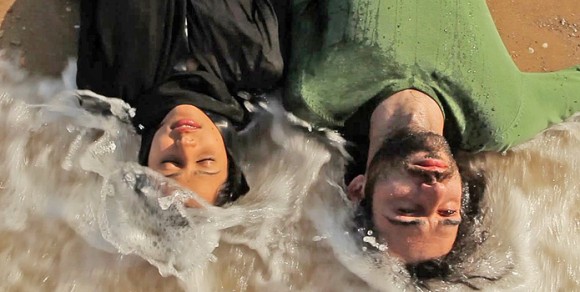 Being the first dramatic feature in 15 years to be set and shot in the Gaza Strip, Habibi has the kind of back story that no programmer can resist, at least not at TIFF. Sweetening the pot and defusing the potential for controversy is the fact that the film’s politics are most definitely of the humanist variety, appropriate given that its lead characters are young lovers who care more about poetry than the miseries of life under occupation, which the film presents with an admirable matter-of-factness.

Habibi’s Arab-American director Susan Youssef was inspired to make the film after seeing a performance of Majnun Layla (a 7th-century epic poem about an ill-fated romance) by teenagers in a refugee camp gymnasium in Khan Yunis. Here, Youssef recasts the poem’s doomed lovers as university students who must conceal their relationship after returning home to their families, their student visas having been revoked during the latest wave of restrictions. Since Layla (Maisa Abd Elhadi), an aspiring engineer, hails from a middle-class family and Qays (Kais Nashef), a shaggy-haired student in Arabic literature, lives with his in a refugee camp, they are unable to marry. The lovelorn Qays takes to writing lines from Majnun Layla on the walls of the town, a pursuit that gives him plenty of opportunities to wander through bombed-out buildings while sporting a pensive expression. Feeling scandalized, Layla’s family step up the pressure on her to marry an American-educated suitor of whom they approve.

What with the extraordinary circumstances of Habibi’s creation, the ordinariness of the film’s early scenes is especially disappointing. Hampered by the sometimes stilted performances and drab, TV-style cutting and framing, the movie is initially more admirable for its intentions than its execution. But as the story’s focus narrows to the experiences of the lovers as they make a doomed bid for freedom, Youssef’s film develops the lyricism it so clearly desires. A series of intimate two-shot scenes also highlight the strength of the lead performances, especially when these self-professed “protectors of poetry” are given a brutal lesson on where living on dreams really gets you. (Spoiler alert: it’s not beyond a security wall.) 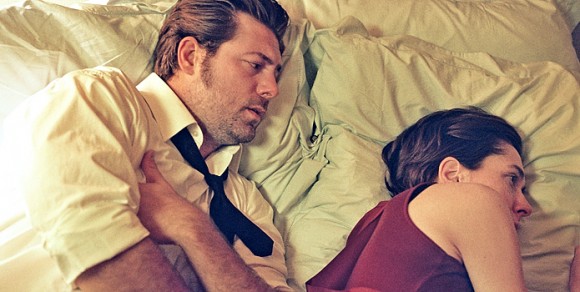 Well, it’s 1-2-3-4 take the elevator at the Hotel Swooni, I’ll be glad to see you later. All we got inside is six characters from different walks of life, different ethnicities and rungs of the European socioeconomic ladder who, amazingly enough, find that their lives intersect in unexpected and edifying ways in this pat, well-meaning but hackneyed roundelay from first-time feature director Beels. (Unsurprisingly, she has mostly worked in television.) In case you’re curious, here’s the scheme: Anna (Sara De Roo) is bored with her predictable husband Henrik (Geert Van Rampelberg), so she’s having an affair with a slightly younger man. Meanwhile, hotel maid Vicki (Natali Broods) has to deal with her estranged mother (Viviane de Muynck) moving into the luxury suite so she can be closer to her daughter, for “unknown reasons.” (Hint: she smokes like a chimney and wears a wig.) Meanwhile, young refugee-from-unspecified-African-country Joyeux (Vigny Tchakouani) was separated from his father Amadou (Issaka Sawadogo) in transit, and he was told to go wait for him at the Hotel Swooni. Is Amadou dead or alive? Will Vicki become a surrogate mom? Will Henrik become less henpecked and confront Anna? Will Hotel Swooni turn out more Grand, or Century Hotel-ish? Say, whatever happened to David Weaver, anyway? Oh yeah. He’s working in television.

Into the Abyss (Werner Herzog, US)—Real to Reel 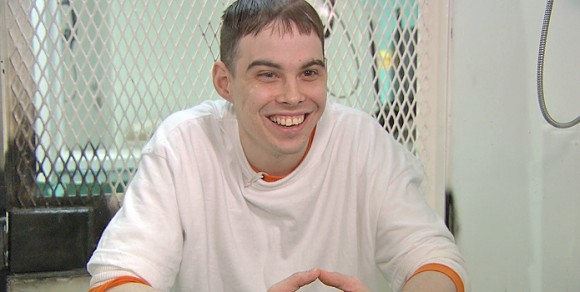 That old devil Werner reportedly jested that any of his films could bear the title of his latest, but what is perhaps most notable, and commendable, about Into the Abyss is how much it eschews Herzog’s (still enjoyable) Romantic grandiloquence and schticky absurdism in favour of a judiciously measured but unavoidably affecting emotional appeal. As part of a larger TV project about death row inmates Herzog encountered Michael Perry and Jason Burkett, the former sentenced to death and the latter to life imprisonment for a senseless triple murder perpetrated in Conroe, Texas in 2000, when both were 18. While the film’s portentous title would appear to promise a descent to the very roots of the evil that men do, Herzog is more interested in the men themselves, and those who have been touched (scarred, wounded, ruined) by their crime.

Seeking to steal a Camaro from the house of two acquaintances, Perry and Burkett first murdered the mother of one and dumped her body in a nearby pond; then, when they returned to the gated community and found it locked up for the night, they waited until the two teenagers returned, lured them into the woods, and murdered them so that they could obtain the remote that would open the gate. After a discompassionate recounting of these details, Herzog avoids asking (or speculating) about what the killers were thinking or feeling at the time of the crime. (This is not his Executioner’s Song.) Rather, he focuses on the consequences: about how it feels to know that one will die in eight days, or be incarcerated for at least four decades; on the present and projected future rather than a past which both men have since fictionalized (each now pinning responsibility for the murders on the other), though their fictions tell as much as a plain confession ever could. And yet Perry and Burkett are far from the centre of Herzog’s narrative. He widens the film’s scope to give equal weight to the sister of two of the victims and the brother of another, former friends and acquaintances of the killers, the chaplain and former guard captain of the Texas execution unit, and perhaps most unforgettably Burkett’s father Delbert, himself serving a 40-year sentence and possessed of a merciless, hard-won self-awareness and contrition that his son seems to be on the way to obtaining. (His recounting of how it felt to have lunch in jail with both of his sons, all of them incarcerated, is not soon to be forgotten.)

It’s remarkable, and chastening, to realize here Herzog’s extraordinary, humanistic skill at allowing (not forcing) people to reveal themselves on camera. If his decades-long pursuit of eccentrics has quite directly yielded the contemporary brand of find-a-freak documentaries, he is leagues beyond them not only in accomplishment but in intent. There is no sensationalizing, no exoticizing, no mockery or condescension towards the (let’s say it) white-trash milieu that Herzog is exploring here. (Which is not to say that he doesn’t make considerable hay out of the comic mileage it affords: one Jared Talbert, a former friend of Burkett’s, had the opening-night audience rolling in the aisles with his almost Kaurismäkian deadpan.) Nor is there any pretentious aggrandizement of the hideous crime at the story’s centre to some statement about violence in America. I cannot honestly think of a more genuinely empathetic, less self-important film about such a subject—which is more than a little surprising, as a large part of the fun of the long-running Herzog show is trying to divine the infinitesimally thin line between ingenuousness and put-on. The many shades of pain on view here quite naturally preclude any joshing, and the fact that Herzog can respectfully, movingly illustrate them without essentially altering the approach he brings to his comparably lighter subjects (from suicidal penguins to bad lieutenants) is a bracing reminder that this perpetual jester, like all great comedians, is forever deadly serious. 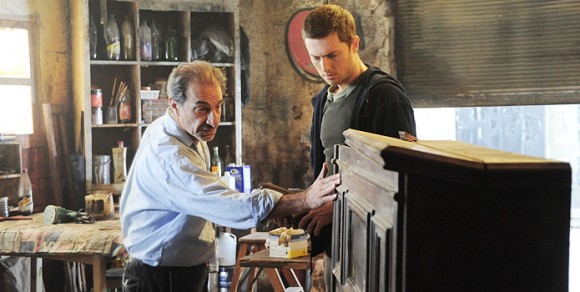 As Restoration proves, the Israeli variation of Oedipal cinema stops in its tracks at the father-killing; here, the more eternal theme of money coming between family members takes the place of prizes and prestige doing the same in Footnote, and mother is nowhere to be seen. An old piano that might be a priceless Steinway serves as the creaky metaphor at the heart of this tale about Yaakov Fidelman (Sasson Gabbai, crabby), a furniture restorer who falls on hard times after the death of his gonev whore-frequenting business partner—who in turn served as substitute father for Yaakov’s despicable money-grubbing son, Noah. Restoration—the title has oh-so-many meanings (one almost prefers the original title, Boker Tov Adon Fidelman, which translates as “Good Morning, Mr. Fidelman,” if only for its pure, unvarnished Yiddishkeit).

But fate comes along in the underwritten form of Anton (Wentworth Miller look-alike Henry David), a new helper for the shop who is also there to take Noah’s familial place; even if this mysterious guy has family problems of his own, he sure can play the piano!  There’s also some pretty ridiculous stuff about the surrogate’s son attraction to Fidelman’s very pregnant daughter-in-law, in case you missed the Biblical references (though it might as well also be Shakespeare). In a year when Israeli cinema seems to have broken through with prizes at Cannes (Footnote, Best Screenplay) and Locarno (the even better Policeman, Special Jury Prize, inexplicably left out of TIFF in favour of the film you are currently reading about), it’s a welcome relief to find there’s apolitical mush like Restoration still being made in Israel, and that festival audiences and juries fall for it. Yossi Madmony’s harmless craftwork lacks any edge, and has been rewarded with a screenplay prize in Sundance, the top prize at Karlovy Vary, four awards (including, naturally, Best Film) in Jerusalem, and 11 Israeli Academy Award nominations. Audience award in Toronto?