TIFF Countdown -10: Take Shelter / Once Upon a Time in Anatolia

The Toronto International Film Festival is not the epicentre of film culture, though it sure feels like it every year for two weeks in September. (If you live in Toronto, it becomes the epicentre of culture, period, for better or worse.) Usually, Cinema Scope limits its coverage of TIFF premieres to features and reviews in the fall (a preview) and winter (a recap) issues, but the existence of Cinema Scope Online—which we hope you read every week, like clockwork—seems like a good excuse for taking a more comprehensive approach.

Over the next week, we’ll be re-posting articles about some key TIFF selections that already premiered at festivals like Cannes and Berlin, as well as a preview of the next print issue of the magazine, featuring new in-depth reviews and interviews for films premiering at TIFF. This is all a prelude to the grand experiment, which actually recalls Cinema Scope’s very first issue: a suite of capsule reviews gleaned from Scope contributors on at least two continents. While we’re never going to cover all 250 or so unimpeachable masterpieces on offer, we’ll try to hit the big ones (or hit-and-run them depending on which big one we’re talking about) and bring attention to the smaller films that the festival is ostensibly geared towards discovering. There will also be daily reviews of the Wavelengths program, and, depending on who is around, some interviews—and maybe, just maybe, a new iteration of the video roundtables that scored so many dozens of YouTube views. In summary, we expect to present a package of reviews and interviews on TIFF that’s both unparalleled and discerning.

We’re doing this not only because we love you, dear reader, but because we want you to spread the word: link us, Digg us, Tweet us, post it on Facebook, print the reviews out and throw them to the wind like the manuscript at the end of The Ghost Writer—just do what you can to let people know that the fine film criticism they’ve come to expect from the Scope brand is available. It’s like getting an entire issue of the magazine free instead of at the usual dirt-cheap rate.

Cinema Scope 48 Preview: Once Upon a Time in Anatolia 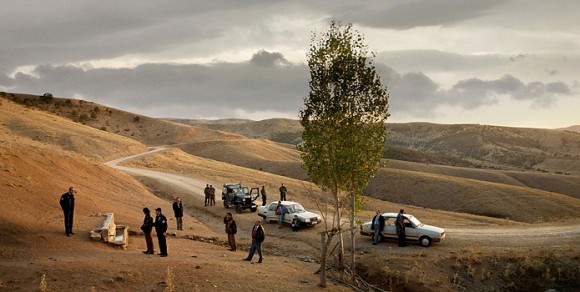 From Memories of Murder (2003) to Zodiac (2007), Bellamy (2009), and Police, Adjective (2009), the past decade has witnessed its fill of revisionist takes on the police procedural—films in which politics, personal obsession, or personal exhaustion eclipse the underlying question of “Whodunnit?” Movies, in short, that push the audience’s lust for closure ever more towards an existential or absurdist void. The co-winner of the Grand Jury Prize at Cannes, Nuri Bilge Ceylan’s Once Upon a Time in Anatolia plunges further still into that abyss, giving us a long night’s journey into a creeping dawn that serves to illuminate little, save for the deep-set crags on the weary faces of Ceylan’s actors. In methodically tracing the play-by-play of a seemingly routine police investigation, it is a film of many details but no explanations, a mystery that conjures a sense of the eternal.

Ceylan’s film begins in a verdant countryside at dusk; slowly, a caravan of cars winds its way from the far distance to the foreground, small clouds of dust illuminated by the headlights. In the cars are several policeman, a prosecutor, and a medical examiner, all looking for something—a dead body, we glean—buried somewhere amongst these rolling hills. And for the next hour, in something like real time, they search, without success, into the gathering night. As they go, the cops occupy themselves with banalities, arguing over the name of a certain tax officer, different kinds of yogurt, the names of nearby towns. Meanwhile the two suspects, brothers named Kenan and Ramazan, remain mostly silent. The prosecutor tells the doctor the story of a young woman who managed to predict the exact date of her own death. The doctor appears incredulous. The prosecutor assures that no foul play was involved. This is, Ceylan’s film seems to say, simply the sort of place where such things happen, and better not to ask too many questions.

Eventually, the men come to rest for the night, in a small village where, as the hospitable mayor informs them, only old people remain, all the young having left to seek their fortunes in the city. And it is here that Ceylan’s already cryptic film further takes on the properties of a ghost story. During a meal, Kenan catches a glimpse of the presumed dead man, Yasar. Then the power fails, and for the rest of the film’s second major movement, the (in)action unfolds against one of the most luxurious nightscapes in the history of movies. It is a sequence, like the long night scenes in Michael Haneke’s Le temps du loup (2003)—the only comparison that springs readily to mind—that acutely conveys the sensual experience of darkness in a place devoid of artificial light pollution, seeing without quite seeing. Which may be a perfect metaphor for a not-quite thriller in which the guilt of the suspects is never in question, but their motivations remain forever out of reach.

Presumably written—or at least approved—by Ceylan himself, the spare, one-paragraph description of Anatolia that graced the film’s official Cannes press book reads simply: “Life in a small town is akin to journeying in the middle of the steppes: the sense that ‘something new and different’ will spring up behind every hill, but always unerringly similar, tapering, vanishing or lingering monotonous roads.” And while this will do little to console those frustrated by the film’s intentional opacity and lack of closure, it gives a fair sense of what Ceylan sets out to do here and, for the most part, brilliantly achieves. Like much of the director’s previous work, only more so, Once Upon a Time in Anatolia is primarily a mood piece that transmits, through every one of its magnificently composed frames, a profound yearning for some intangible other—something long ago lost, or something that never really existed, except perhaps in tales of an ancient kingdom that was the jewel in Alexander the Great’s empiric crown. Were the title not already in use, Ceylan might just as soon have called his film Melancholia—or, had he not been preempted by Monte Hellman, Road to Nowhere.

The longing for an irrecoverable past has been a favoured Ceylan trope since his first two features, The Small Town (1997) and Clouds of May (1999), both of which had Chekhov (and The Cherry Orchard in particular) as a reference point. His international breakthrough, Distant (2002), expressed such ennui in its very title (and in its sidelong glance at the dissolution of a marriage), while 2006’s Climates (in which Ceylan starred alongside his wife and co-screenwriter, Ebru) confronted marital collapse head on, warts and all. If Anatolia is, by contrast, the closest Ceylan has come to making a “genre” film (though 2008’s Three Monkeys approached film noir), it also seems the clearest expression yet of just who Ceylan is as an artist, out from under the shadows of Kiarostami (whose influence loomed large over Ceylan’s first three features) and Cassavetes (a strong point of reference for Climates) and charting his winding course through a cinematic language he can fully claim as his own.

If Anatolia does call something to mind, it’s not another filmmaker so much as it is Ceylan’s Nobel Prize-winning countryman Orhan Pamuk, in particular his cult 1990 novel The Black Book, a similarly elusive chronicle of a disappearance that alternates between its story of a missing newspaper columnist and samples of the journalist’s columns, many of them wry meditations on the muddied waters of Turkish cultural identity. One concerns a mannequin maker who resolved to fabricate mannequins that resembled actual Turkish people rather than ideals of Western beauty, only to find that the public preferred the latter. In Ceylan’s film, the dark, mustachioed prosecutor is told that he resembles Clark Gable, and he exults in the comparison—he is, like more than one character in Anatolia, someone who dreams of cinema, and wishes life could more closely resemble it.

In Cannes, when Anatolia’s missing corpse was finally unearthed, applause broke out from one corner of the audience at the official press screening—a sarcastic gesture, presumably, but one that Ceylan’s own laconic, desensitized characters might well have made themselves. A few more plot details hazily emerge, including the intimation of a love triangle turned violent. Finally, we make our way back to the city—or what passes for one—and a long autopsy scene whose gory details happen almost exclusively off-camera, but which nevertheless managed to send multiple viewers bolting for the exits with its you-are-there sound design. It is, like the film itself, a scene rooted in a fruitless search for meaning, in which certainty retreats the more doggedly one seeks it. Lying there on the slab, the dead man resembles a mythic creature, a relic of an unknowable past. Outside, his survivors resume the routine of their lives, and time stretches towards infinity.