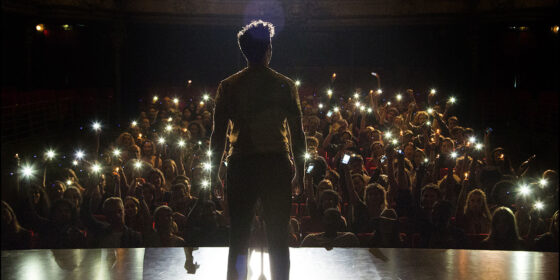 Considering that a stand-up performer who goes by the singular moniker of Brahim can pack French concert houses and have his face plastered all over Paris, he must have some pretty damn fine comic stylings. Whatever they may be, they pop up at around the 26-minute mark of the erratic and ultimately exhausted The Price of Success, and run less than two minutes. That’s the first and last we witness of Brahim the comedian (Tahir Rahim), who’s otherwise seen in a chain of off-stage, private dramas that revolve around his business decision to dump his dogged but thuggish brother, Mourad (Roschdy Zem), for more professional management.

This is like making a movie about a prizefighter who hardly boxes—it’s a perverse and misguided undoing of the story’s central truth, since the essence of characters in such professions is their sheer dedication to their craft and how it defines them as people. In director Teddy Lussi-Modeste’s and co-writer Rebecca Zlotowski’s screenplay, Brahim’s craft is of no interest at all, to the point—and this is underlined by Rahim’s flat, morose performance—where it’s fair to question whether Brahim is even the stand-up artist the movie claims him to be. Even in a scene that ostensibly takes us into a writing session for Brahim’s upcoming tour, there’s more time spent capturing his workspace’s upscale bourgeois setting than on his team bouncing around ideas and lines.

The Price of Success is a title that already reveals the game at hand: a melodrama tracing how celebrity and fame brings new burdens, including that old showbiz chestnut that reminds one that if want to make it, you have to shed the folks who brought you to the dance. For Brahim, that means hot-headed Mourad, whose criminal past is never far from the central swirl of events around the star. The split is inevitable and inevitably nasty, and a last-ditch third-act action scene feels like a desperate gambit for a movie going nowhere.