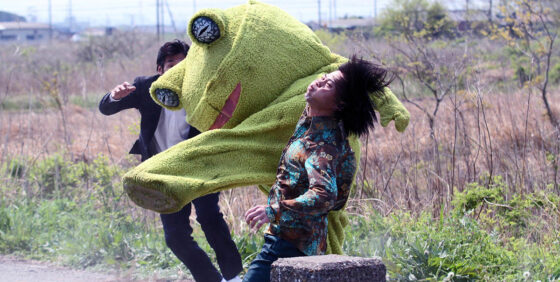 Yakuza, martial arts, vampires, romance, and a devious villain dressed up as a frog. This cursory summary might just be the most accurate one, seeing that in Yakuza Apocalypse, Miike Takashi reaches new heights of disregard for narrative coherence, even for him. Changing its course throughout, this ebullient mess of a movie unfolds much like a video fighting game––and what of it, really? A decidedly minor entry in Miike’s expansive catalogue, Yakuza Apocalypse is meant to please and entertain, and his fans (this critic included) can’t help but be pleased and entertained. An added charm lies in the movie’s lower budget, coming on the heels of Miike’s recent large-scale productions; for instance, the Frog Man is, literally, an actor wearing a gigantic reptile costume, rather than a CGI concoction. This makeshift quality comes off as simply irresistible. As though interrupted in midsentence, Yakuza Apocalypse joins the likes of Lesson of the Evil (2012) and As the Gods Will (2014) among Miike’s promises of grandiose sequels to come. That’s why I’m so reluctant to believe the prolific filmmaker who swore off violence in his Cannes video letter won’t revisit this territory any time soon. Maestro, we’re awaiting the Frog Man’s return!