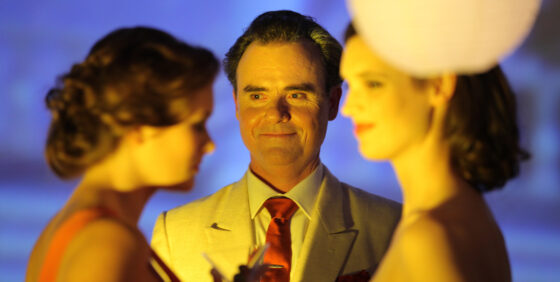 The biographical documentary presents a number of problems for a filmmaker, primarily the fact that the genre’s standard format—the forward plodding of the subject’s life events punctuated by their notorious claim-to-fame moments—is staid and tired. But Gillian Armstrong’s attempt to shake things up on a formal level in her Orry-Kelly doc Women He’s Undressed is such a painfully failed experiment that a more traditional approach may have been preferable, if just to make the film at all watchable.

On paper, the story of Orry-Kelly is the stuff of juicy Old Hollywood gossip. A gay Australian ex-pat who came to in New York in the 1920s and moved to Los Angeles with his “roommate” Archie Leach (better known as Cary Grant), Kelly gained fame as a talented painter and costume designer, ultimately dressing the leading ladies of over 300 films including Jezebel, Casablanca, Some Like It Hot, and Gypsy.

Armstrong tries to put a spin on the conceit of letting a documentary subject “tell the story in their own words,” a tactic recently put to effective use in What Happened, Miss Simone? and Cobain: Montage of Heck. In a series of very awkward segments, actor Darren Gilshenan stands in for Kelly, narrating the events of his life directly to the camera, often while inexplicably rowing a boat on an empty soundstage (a metaphor for the liminal space between Australia and Hollywood? Between being closeted and outwardly queer? It’s hard to say). It’s a gamble that does not pay off, and does not gel at all with the rest of the film’s archival material. As its title suggests, Women He’s Undressed strives to be a cheeky jaunt through Orry-Kelly’s illustrious career, but the man himself would undoubtedly be horrified to have been caught dead in this off-the-rack dreck.