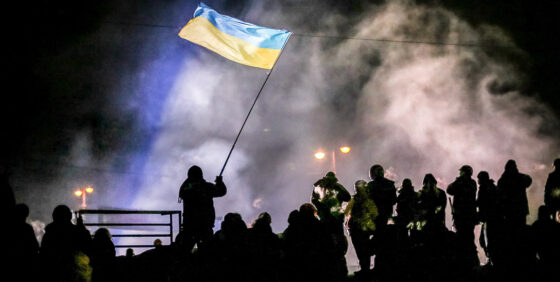 The Ukrainian Revolution of Dignity by now has been the subject matter of a slew of movies, each dramatically different from the other. There was Sergei Loznitsa’s auteur project Maidan; the reportage Kiev/Moscow by Alexander Rastorguev and Pavel Kostomarov; and the chronicle Stronger Than Arms by the #BABYLON’13 collective. Winter on Fire: Ukraine’s Fight for Freedom by Evgeniy Afineevsky (director of the 2009 comedy Oy Vey! My Son Is Gay!) attempts to document the unrest in minute detail, day after day, thus purporting to relate the story “as it really happened.” Made for Netflix, this account is geared, first and foremost, toward American and European audiences who haven’t the foggiest notion of what actually transpired on Maidan Nezalezhnosti in Kiev.

With 28 cameramen, 93 days of shooting, and Angus Wall (David Fincher’s frequent editor) in the producer’s seat, Winter on Fire is ambitious prestige fare in a number of senses. However, to criticize the film on strictly cinematic terms would be to miss the point, since this made-for-TV documentary finds itself clearly out of place at a film festival. The small screen doesn’t necessarily preclude reflection, analysis, or journalistic precision, but Winter on Fire is above all a propaganda piece that goes to great lengths to avoid uncomfortable questions. The footage has been selected carefully enough to eliminate any possibility of ambivalence as Afineevsky seeks to announce some indisputable, ultimate, capital-T truth on his subject, eschewing ambiguity and casting in bronze a new, officially sanctioned mythology.

While the film’s informational value is almost non-existent, its emotional knobs are turned up to the max. Multiple deaths are set to a melodramatic score and followed by activists admitting they were, indeed, prepared to die for their cause. The slogans which basically constitute the movie are repeated over and over again. Seemingly in keeping with the infamous motto “God, Country, Family,” the filmmaker leans exceedingly heavily on the members of different churches (the title of the first version of the film was Pray for Ukraine), while a 12-year-old boy, who co-narrates the events, confesses that the Revolution gave him his first education. I wonder why propaganda so readily avails itself of children.