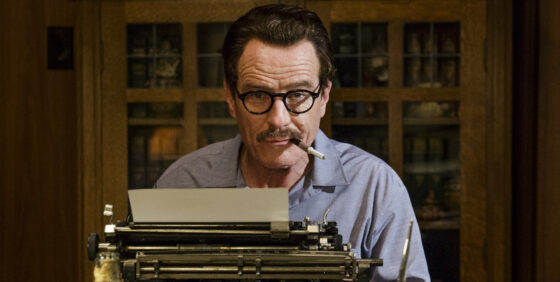 All Dalton Trumbo ever wanted was his name on an Academy Award, and the same goes for the people who’ve been entrusted with telling his life story. This is not to impugn Bryan Cranston or the other crackerjack actors cast as (in)famous faces from Hollywood’s past—chances are that Otto Preminger would have signed off on Christian Berkel’s campily imperious impersonation, which suggests that the director was actually Mr. Freeze in real life. But John McNamara’s pandering hand job of a screenplay uses the broadest strokes possible to dramatize the blacklist era, in essence undermining Trumbo’s own (directly quoted) contention that there “were no heroes or villains”—at which point director Jay Roach cuts to a demonically goateed Edward G. Robinson (Michael Stuhlbarg) sitting forlornly in the audience of a gala tribute to the Great Man.

Like Argo (2012)—which it evokes through the casting of John Goodman as an uncouth producer—Trumbo is a self-salute to the power of movies and the ingenuity of the people behind the scenes, yet if anything it’s actually less successfully contextualized, historically speaking. Unlike Good Night, and Good Luck. (2005), which it flatly rips off at multiple junctures, Trumbo never persuasively connects its hero’s stubbornness to a substantive point of view (asked by his daughter to explain communism, Dalton tells her it’s as simple as sharing a sandwich). After a while, the film’s entertainment value begins to approach that of none other than Straight Outta Compton: it’s a parade of icons whose names and accomplishments are duly inventoried out loud, just to be safe. It’s no great accomplishment to make modern, cosmopolitan viewers feel superior to the prejudiced conservative hordes of the past, and while Dalton Trumbo’s principled heroism is undeniable—and outlined more persuasively in John Berry’s 1950 documentary The Hollywood Ten—Trumbo confers an unearned sense of accomplishment on its audience. Stand up and be counted, you cinematic Spartacuses, and show your solidarity this Oscar season.