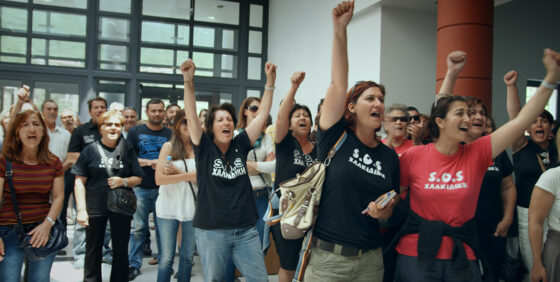 Apocalyptic fantasies are in heavy rotation these days at both the multiplex and the art-house. In this climate-change documentary, anti-capitalist crusader Naomi Klein pronounces herself a late convert to saving the world, and gets things rolling with the disconcerting admission that she doesn’t much care for climate-change documentaries. Heck, next thing you know she’s dissing polar bears.

Beware an ideologue in confessional mode. Whatever Klein’s misgivings, they haven’t prevented her partner Avi Lewis from recycling the genre’s most hackneyed tropes. Indeed, the film’s guiding principle is nothing if not tried and tested: a tour of the environmental front lines, talking to protestors on picket lines from Alberta to India… Each of these potted histories could have furnished its own feature (and probably has). On the other side of these lines are arrayed the faceless forces of global capital, Klein’s chosen nemesis and the prism through which she surveys the battlefield. And of course it’s hard to argue with her long-view analysis—corporations are cooking the planet—except to the extent that she seems to feel it’s revelatory. Perhaps she hasn’t watched as many eco docs as the rest of us. Unlike, say, Michael Moore, Klein and Lewis don’t stoop to satire, entertainment or, indeed, artistry. Rather, this is an illustrated lecture, occasionally poignant in its tub-thumping “man the barricades, praise Marx and pass the placard” rhetoric, but as a rallying cry this We-vs.-1% feels too little, too late to change anything at all.