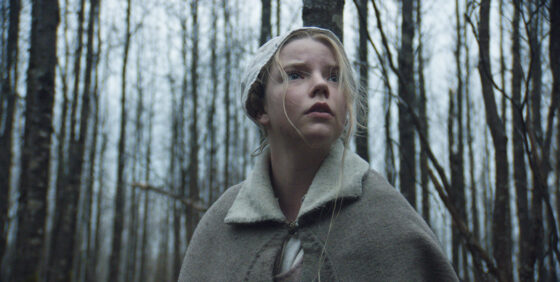 Robert Eggers’ debut feature The Witch—one of the big talking points to emerge from this year’s Sundance US Dramatic Competition—is a mythopoeic horror film that uses a wealth of unidentified 17th-century journals, records, and myths to construct a slow-burning descent into hysteria. Eggers opts for a cool, autumnal mise en scène (you can’t not think of M. Night Shyamalan’s The Village [2004] while watching) in this New England folktale about a hermetically burrowed family of Irish colonizers who start dying off one after another due to evidently occult forces. Immediately after an early scene shows an infant, in the middle of a game of peek-a-boo, being whisked away into the forest by an invisible presence, Eggers removes any doubt about the perpetrator of this paranormal kidnapping by showing the baby’s fate. The shadowy glimpses of unadulterated evil in this scene’s fiery chiaroscuro imagery are the summit of bona fide terror in The Witch; from here, the film becomes marred by (surprise, surprise) a witch-hunt narrative, which we, the clued-in viewer, can only be on one side of. The film’s remaining delights, then, can solely come from Eggers’ staging of the gruesome fates of future victims, which are intense but over-telegraphed, and never as petrifying as the aforementioned baby scene. That the film climaxes with an inexplicable change of heart for a major character (or was it a reveal? It’s impossible to tell for sure) suggests that Eggers may have taken from one too many sources to patch this thing together. And that he chooses to ignore the sociopolitical and mythological baggage that is evoked by his story’s pointed anti-feminist trajectory is a problematic that, I find, both leaves the film open to breathe and makes it an awfully suffocating space to wander in.