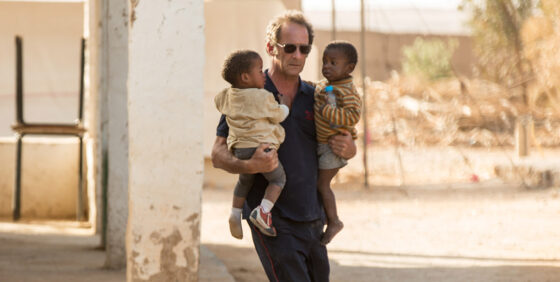 Everything about this fact-based account of French aid workers plotting to transport African orphans back across the Atlantic to pre-paid adoptive parents—under the guise of a fictitious NGO whose mandate is geared towards in-country education—is scrupulously realistic. And the questions it asks about Western altruism in the Third World are pertinent and in proportion to the story being told. Starting with Vincent Lindon’s stubborn and selectively principled meddler-in-chief Jacques, the characters are permitted to have flaws without the filmmakers writing them off entirely. When the group members talk and argue amongst themselves about the purpose of their mission, there’s the sound of honest cacophony instead of rhetorical points being scored.

Unfortunately, that same desire to present all sides of the issue results in a film that’s so even-handed as to almost cancel itself out dramatically—which then requires certain heightening touches to keep it exciting.  At times, director Joachim Lafosse resorts to the visual and aural language of thrillers (quick cutting and pounding drums) to give outer shape to a film that’s mostly about interior struggles. Meanwhile, the script’s best idea—the inclusion of a journalist (Valérie Donzelli) who becomes implicated in the scheme while trying to shield herself with her video camera—isn’t emphasized enough to give the film a persuasively self-reflexive shape. Ultimately, the film is taken over by the same suspense-movie mechanics that drove Argo (2012), right down to a climactic chase scene en route to a runway. And while everything is brought off convincingly and without overt clichés, the final impression is of a film that avoids bad choices without necessarily offering anything substantial in their place.