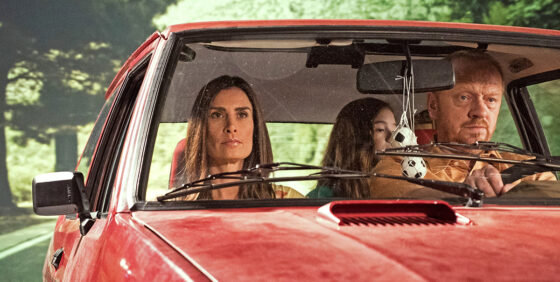 The past is rear-projected in Igor Drljaca’s sophisticated second feature; while the exact nature of the (student?) film being shot on a soundstage in the film’s centrepiece sequence is unclear, it’s obvious that Yugoslavian actor Jasmin (Jasmin Geljo, who was also in the director’s earlier Krivina) is uncomfortable pantomiming a drive through his homeland, especially when men in military uniforms hitch a ride. With its themes of alienation, assimilation and performance, The Waiting Room is reminiscent of films by Atom Egoyan—the early, (intentionally) funny ones. In Krivina, Drljaca was trying simultaneously to make a head-trip movie and a road-trip movie, and the effort was palpable. Here, with many of the same elements in place—elliptical storytelling, undercurrents of nostalgia, smartly used Toronto locations—he’s come up with something that’s at once more relaxed and more successfully conceptual than its predecessor. It’s also a terrific showcase for Geljo, who has already been compared by critics to Louis C.K. (right down to a haggard-Pagliacci turn in drag) but also seems to be working from his own core of professional ambition and anxiety. An audition scene where Jasmin surreptitiously flips the script on a casting director who wants him to dutifully convey bulky Balkan menace is fuck-you funny while also serving as a piece of film criticism, levied by the character on behalf of the actor playing him—and at the behest of a director who’s so clearly sick of certain clichéd modes of representation that he’s spending what’s left of his youth (and various funding bodies’ monies) avoiding them at all costs.