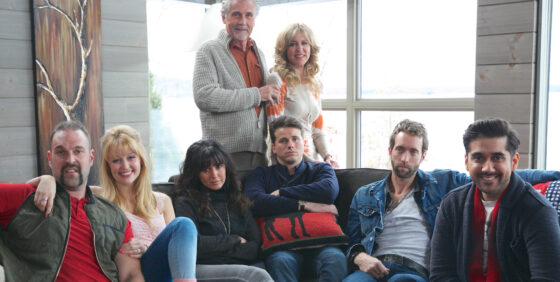 For generating the mental image of Chad Kroeger getting head from Sloane from Entourage, The Steps warrants scorn; it’s a weak Canadian movie indeed that has to namecheck Nickelback in order to get a laugh. Actually, the funniest moment in Andrew Currie’s film is when Big Apple broker Jeff (Jason Ritter) phones his sister Marla (Emmanuelle Chriqui) to plan a trip north of the 49th parallel after walking through what appears to be downtown Toronto. That inadvertent surrealism quickly gives way to drab dramedy as Jeff and Marla decamp to Parry Sound to join their father (James Brolin), his new wife (Christine Lahti), and her three adult sons for a weekend of blended-family bonding, during which time the interlacing tensions and resentments within the group will be pulled ever tighter.

The bleak-cottage-trip-of-the-soul subgenre is so popular in this country that it has its own checklist of clichés, which The Steps duly ticks off: we know that there is going to be at least one inappropriate hook-up and devastating personal revelation apiece, and that illegal substances will be ingested with ostensibly hilarious consequences. Currie stages these scenes with requisite professionalism, but there isn’t a whole lot of energy here, starting with Ritter, whose startling physical resemblance to his father doesn’t include a similar ability to muscle through weak comic material. He’s a drag, and the change of heart forced upon his character at the eleventh hour is phony through and through. The only performer who salvages any of her scenes is Lahti, whose skilled line readings come as a relief amidst all the ensemble mugging.