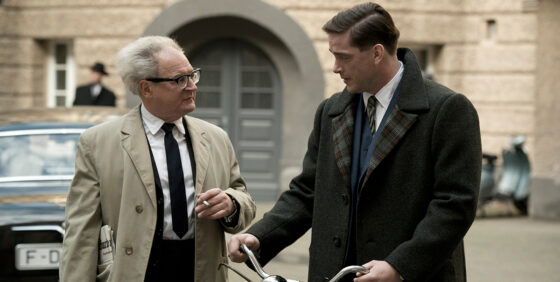 The People vs. Fritz Bauer narrows its focus to the period when West German attorney general Fritz Bauer (Burghart Klaussner), working covertly and against the wishes of the many former Nazis in his government’s ranks, aided the Mossad in the capture of Adolf Eichmann. It’s fine material for a procedural, but director and co-writer Lars Kraume badly muffs the film’s pacing such that long stretches of tedious character development leaves the investigation’s revelations rushed, and even nonsensical. Much is made of Ronald Zehrfeld’s closeted lawyer, a character invented to mirror Bauer and receive pearls of wisdom like, “One should never give in to tyranny, Karl. Never.” Karl’s sympathy with the A.G.’s quest for justice is construed as a matter of the two lawyers’ shared preference for men, subtly indicated by ornate socks and unsatisfied wives. The long-chastened Bauer warns his young charge against falling into the arms of a nightclub singer with a surprise between her legs—revealed in a digitally manipulated and ostensibly shocking shot that only serves to confirm an utterly reductive conception of sexuality—but the film stupidly demands the younger man’s sacrifice for Bauer’s continued vigilance. Klaussner does a serviceable impersonation of Bauer’s hair, but poor Zehrfeld sure looks like he wishes he was back in Christian Petzold’s Phoenix (2014), an outlandish fiction with much more to say about the vertigo of postwar Germany.