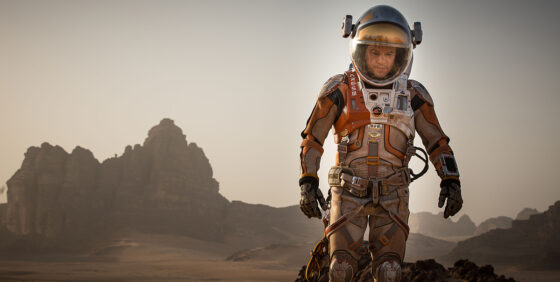 Don’t say Twentieth Century Fox has no taste for the meta: concerned as it is with the thorny ethics of expending unimaginable resources and risking multiple lives for the slim possibility of saving a single lost foot soldier in the colonization of the angry red planet, The Martian not only revisits the central dilemma of Saving Private Ryan (1998) but actually sticks Private Ryan in the title role.

Directed by Ridley Scott and adapted by Drew Goddard from the eponymous novel by Andy Weir, this bloated by mostly entertaining chunk of shameless American triumphalism casts Matt Damon as Mark Watney, a NASA botanist accidentally abandoned on Mars when his crew is forced to make an emergency evacuation. There’s initially little reason to hope that Watney will survive more than a few weeks, but untold bursts of MacGyver-like ingenuity, boundless optimism, cheerful disco hits and episodes of Happy Days and Laverne & Shirley keep our hero hanging on while the bureaucrats and science whiz-kids back on Earth (portrayed by the likes of Chiwetel Ejiofor, Jeff Daniels, Kristen Wiig, Michael Peña, Benedict Wong, Jessica Chastain and Sean Bean) work out the details for the big miracle rescue mission, and even trick the Chinese into helping out along the way. Though it evokes fond memories of human-alien friendship in Robinson Crusoe on Mars (1964), there are, alas, no actual Martians in The Martian, the idea being that Watney sticks it out on Mars so valiantly that by the end he’s basically a naturalized citizen.