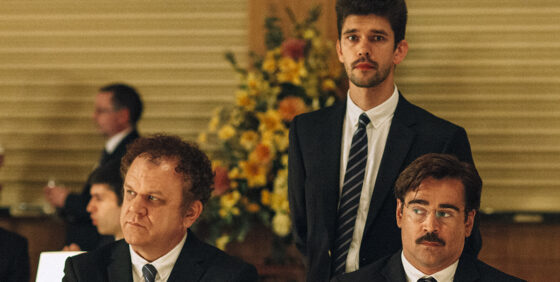 You’d be hard-pressed to think of a more singular contemporary filmmaker than Yorgos Lanthimos, whose off-kilter satires are perfectly attuned to humanity’s endless capacity for self-delusion. It’s a shame, then, that to this critic Lanthimos’ English-language debut The Lobster recalls nothing so much as My Blueberry Nights (2007), in which Wong Kar-wai sang all his old auteurist songs to an off beat with a wasted cast of high-profile international stars (including Lobster narrator and star Rachel Weisz) at his disposal. As does Dogtooth (2009), The Lobster begins with the establishment of a hermetic system founded on maddeningly arbitrary principles: in this instance, a dystopian society where single people, like sad-sack hero David (Colin Farrell), are rounded up at a hotel resort and given 45 days to find a mate, lest they be transformed into an animal of their choosing. And as in ALPS (2011), where a team of actors cum unlicensed social workers less than persuasively substitute for their clients’ lost loves, the most intimate of relationships are intentionally flattened via stilted performances, with the resort’s guests feigning nosebleeds and sociopathic tendencies to satisfy their overseers’ insistence on finding a match who shares the same “defining characteristic.”

The Lobster is certainly no less ambitious than its high-concept predecessors, even mining the absurdist potential of its premise to arrive at some fresh insights on impairment—e.g., seeing apparent deficits like limps as signature features that bring one closer to, not farther from, one’s self. The trouble lies in the film’s noncommittal tone, which too often deviates from Lanthimos’ reliable deadpan. Set against the earlier films’ prickliness, The Lobster seems oddly ingratiating, keeping the dashed-off non-sequiturs but often anchoring them in tired bromides. Olivia Colman’s officious resort manager gets the worst of it, at one point assuring a new couple that if they encounter any problems they’ll be assigned children: “That usually helps.” Whether Lanthimos’ broadening of his style to such common-sense punch lines is the by-product of a deliberate shift from his abrasive aesthetic or just a transitional hiccup (into English, into modestly higher budgets), it still makes for a mild but still disconcerting bump in an otherwise unerringly smooth career.