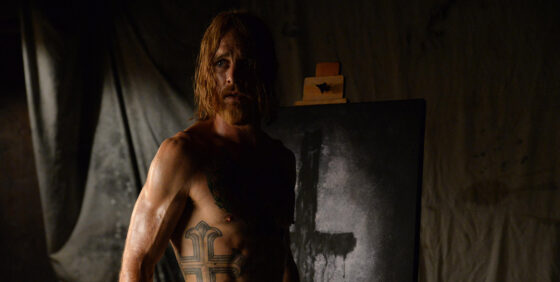 One’s enjoyment of The Devil’s Candy will depend largely upon an affinity for heavy metal and the occult, though the film’s engagement with the latter is mercifully self-effacing, starting with naming its struggling painter/metalhead protagonist Jesse Hellman (Ethan Embry, startlingly resembling McConaughey as Rust Cohle). Upon buying a conspicuously cheap rural Texan home for his wife Astrid (Shiri Appleby) and daughter Zooey (Kiara Glasco), Jesse and his family are menaced by the mysterious Ray (Pruitt Taylor Vince), the hulking, mentally unstable son of the house’s deceased owners, and who has a sinister plan for Zooey.

Sadly, the film whiffs the baroque climactic good-versus-evil confrontation and trots out too many clichés getting there. And while the six-year gap separating Byrne’s first and second features doesn’t inspire much hope as to the imminent arrival of the film that will finally fulfil his promise, it’s not like there are an abundance of horror films bearing a distinct directorial sensibility, and it’s this which carries The Devil’s Candy through its rough patches. There are few more lingering images in recent genre cinema than that of Ray slowly receding from view behind a stained-glass window, his visage contorting before disappearing—the kind of shot I’m sure I’ve seen before, but never as unnervingly. One can hope that Byrne’s next will sustain that kind of visual ingenuity, and apply it to material deserving of it.