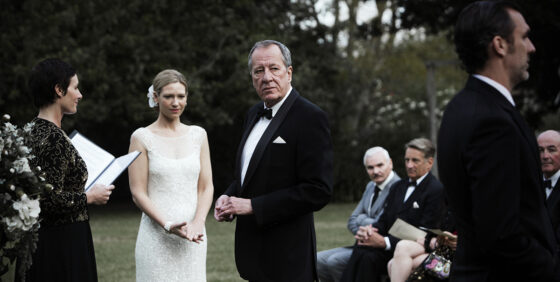 The Daughter begins with Henry (Geoffrey Rush), patriarch of his Australian village’s wealthiest family and proprietor of its century-old sawmill, unable to shoot a wild duck. Is there a metaphor here? Of course there is—this is Ibsen!—though the metaphor I’m thinking of applies to writer-director Simon Stone’s inability to shoot The Wild Duck, or at least shoot it in a way that feels congruous with naturalistic cinema or coherent in a 21st-century context.

Things start bad and get worse. That sawmill, the village’s lifeblood, is closing down. Henry is getting married to his former housekeeper, a woman twice his age, from whom he’s keeping a devastating secret. Henry’s prodigal son Christian (Paul Schneider) returns for the wedding, but he’s developed a serious booze problem, a bad marriage, and a colossal chip on his shoulder during his 15-year absence. The sole glimmer of hope comes from Christian’s cheerful old college chum Oliver (the very charismatic Ewen Leslie), who married a good woman (Miranda Otto) and has a loveable science whiz for a daughter (Odessa Young). But Christian, seemingly determined to lay waste to all happiness in his path, sets about dredging up the past, spoiling his father’s celebrations and causing an unbearable rupture in Oliver’s domestic life.

The problem isn’t that Stone lacks directorial chops: The Daughter brims with atmospheric landscapes and well-crafted weaves of images and dialogues from numerous scenes unfolding at once. Stone is very attentive to behaviour, and the performances he draws from his cast are uniformly superb—until they’re not. The transposition of Ibsen’s extremely fraught narrative requires levels of emotional agony in the third act that don’t feel of a piece with the film’s established tone, and the final, brutal blows in this story feel unearned and implausible.