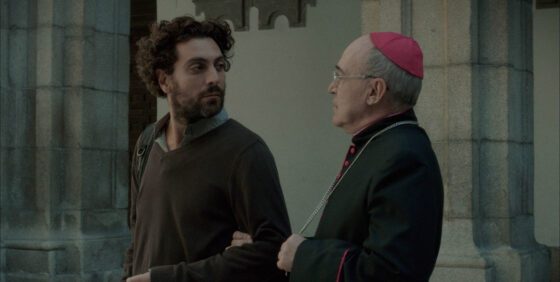 Federico Veiroj’s A Useful Life (2010)—in which a middle-aged programmer finds himself out of a career after his Montevideo cinematheque fades to black—considered a post-cinema existence and decided it was just fine. Yet the film’s irreverence with regards to its own medium was undercut by a formal elegance and sense of play that made cinema feel, in fact, very much alive. The Uruguayan director’s new film, set in Madrid, conveys a similar ambivalence toward another fallen cultural institution: the Catholic Church.

Veiroj’s shaggily handsome protagonist, Gonzalo Tamayo (Álvaro Ogalla), seems to have completed or resolved precious little in his 30-odd years on Earth. He’s been in university for many years, with no academic advancement to show for it. He spends days lingering over books and records or enjoying erotically charged daydreams. He still pines irrationally for his cousin, just as he did in childhood. The sole objective in Gonzalo’s life that he seems to have deemed worthy of focus and attention is to have himself permanently removed from the Church’s baptismal records—rather than add something to his curriculum vitae, Gonzalo is trying to have something erased from it.

As this process becomes an increasingly quixotic struggle against an archaic bureaucracy—which at times feels analogous to contemporary struggles against Big Data—the Church looms over Gonzalo’s consciousness with great aesthetic and intellectual power, to the point where even when Gonzalo appears to have won his bureaucratic liberation, he winds up enacting an ancient ritual exactly as outlined by the Church. Its low-key comedy reflected in camerawork that at times recalls Oliveira, The Apostate is inflected with a sense of mischief and wonder that teeters on the edge of the devotional.