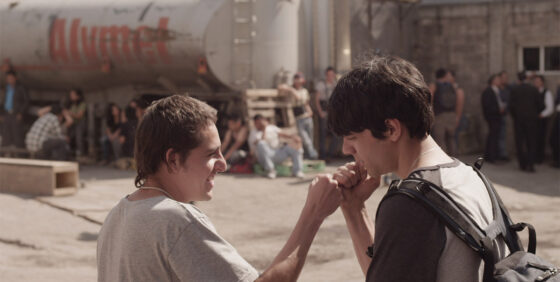 Ciudad de México. Skateboarding compadres and casual lovers, Miguel and Johnny have known each other since they were kids—Johnny’s mother, Brenda, is still the maid for Miguel’s well-off family. The two kids spend most of their wasted days skating through the streets of the city, along the overpasses and through the markets and plazas, supporting their shambolic lifestyle by herding up “cows” to be “milked”—that is, marshalling their friends to sell their blood to emergency rooms and ambulances. All goes relatively well—well, except for the waif who donates too much blood and can barely stand up straight—until a lucrative offer arrives for the boys’ services which turns out to be cartel-related, and much more than the still-innocent Miguel and Johnny can handle.

Directing a story inspired by film noir and the life of his brother, Guatemalan-born director Julio Hernandéz Cordón hits the big city and goes for naturalism and, at times, lyricism, over experimentation. Though he’s still working with non-actors—the two leads, cast off Facebook, are excellent—in Te Prometo Anarquía Hernandéz Cordón is painting on a larger canvas. He’s stepped up his game, cleaving close to his script and developing a narrative that above all privileges mood, but intentionally comes into focus about halfway through, ramping up the tension as the big deal goes down and the stakes increase. Creating a melancholic portrait of generational confusion, Hernández Cordón gives us doomed love among the present-day los olvidados who live in the now, an odd romance that shows how sometimes the only choice you’re left with is to start anew.