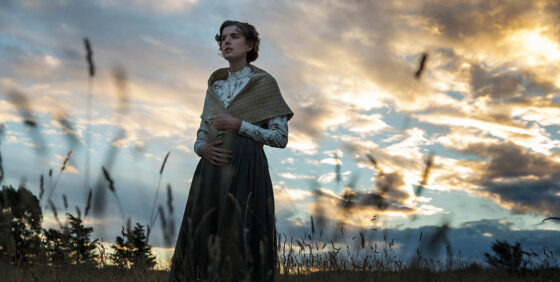 There is no such thing as a “minor” Terence Davies. If anything, the divisive response at Toronto to the Liverpool-born master’s new Sunset Song (based on a 1932 novel by Lewis Grassic Gibbon) verifies the preciousness with which critics have been holding Davies’ auteurism, and perhaps their own experiences of his work, in their minds. (Few would disagree this is his least abstract, most narratively conservative picture yet.) Sunset Song is anchored to Chris (Agyness Deyn), an (actual) bonnie lass growing up in rural Scotland just after the turn of the century. Her father (Peter Mullan) is a joyless, Bible-thumping sadist who rules by the lash, the type of character typically reserved for, well, Peter Mullan. The positioning of Mullan’s character as a bottomless dumping ground for the audience’s fear and hostility is probably more Gibbon than Davies, but the filmmaker is perhaps too good at turning these passages into a dreadful experience.

While the first hour of Sunset Song addresses Chris’ attempts to imagine a life for herself beyond this particular one-family cult of patriarchy, it’s consistent with earlier Davies that no small part of her repose is found in the very act of looking. Dour and musty interiors are juxtaposed with breathtaking, impossibly colour-corrected 70mm vistas of wheat and grass, with voiceover quotations from the novel buttressing the film’s unapologetic pastoralism (“And the smell of the Earth in her face almost made her cry, for the beauty of it”). Early into Sunset Song, I had the discomfiting notion that I was watching an over-refined classicalism bleed blindly into artlessness; what came to mind was less The Long Day Closes (1992) and more Michael Bay’s axiom at a Pearl Harbor press conference that “You should be able to hang every frame on the wall.”

Chris’ mother takes her own life, and after Pa is debilitated by a stroke, Chris (silently) takes her father’s. And soon she has met, and fallen in love with, a bloke from town named Ewan (Kevin Guthrie), giving way to Sunset Song’s bittersweet middle passage: a brief romance made all the more elysian for its welcome sense of relief (although the film has more than conditioned us to expect the worst). The couple have a low-stakes wedding in Chris’ family barn, on New Year’s Eve; in a moment of sublime power, Chris regales the crowd with a song, only for the image to haphazardly dissolve (grainlessly, painlessly) from a wide shot of her singing to a medium close-up. It’s jarring, but matters little—this is as tranquil a moment as exists in Sunset Song, and it’s an understatement to call its happiness hard-won.

Chris and Ewan have a child; the Great War begins; Ewan is drafted; he returns from basic training a person utterly alien to the man Chris married—somebody closer in temperament to her father. This expository lapse is masterful: it bespeaks time’s callous indifference, cementing that this story must begin and end on Chris, alone. Eventually, Sunset Song can’t help but reveal what—aside from the imponderable lengths of evil Christendom has allowed men to do—drew Davies to the material in the first place: the handshake memory makes between internal trauma and national myth. I was woefully unprepared for the film’s devastating final passages, wherein the camera returns to the same florid panoramas from before, now granted a (literally) breathtaking sorrow and majesty that risks turning the film’s soft-nationalist bent utterly inside out. There is no such thing as a minor Terence Davies.