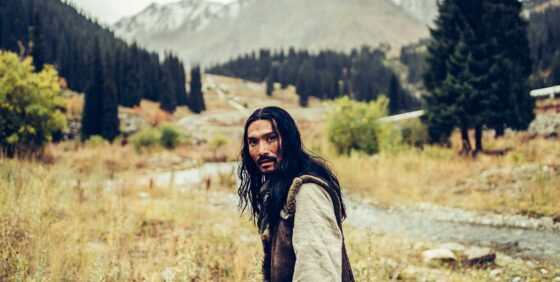 With Kazakhstan going to the dogs, young Ilyas decides to run with the wolves. Stranger isn’t officially an adaptation of The Jungle Book, but there’s more than a pinch of Kipling to its wild-child set-up. The notion that a feral lifestyle on the outskirts of the steppe is preferable to village life under the aegis of Stalinism isn’t exactly hard to put across, and Yermek Tursunov’s film is told in broad, almost mythological strokes. When he returns years later to his old home in the strapping adult form of actor Yerzhan Nurymbet, Ilyas is figured as an outsider, but he’s also stronger and nobler than his suffering countrymen. The theme of the individual struggling to reconcile with the community is a cinematic perennial, and, combined, with Tursunov’s emphasis on pictorial beauty, it pegs Stranger as a Kazakh stab at a western—albeit one without the sturdy dramaturgical armature of its classic American antecedents. It is of course possible that some of the subtleties have been lost in translation, and conversely that the writer-director’s thick-fingered symbolism will speak more plangently to his domestic audience. But from this vantage point, Stranger looks awfully familiar—and not much more than that.