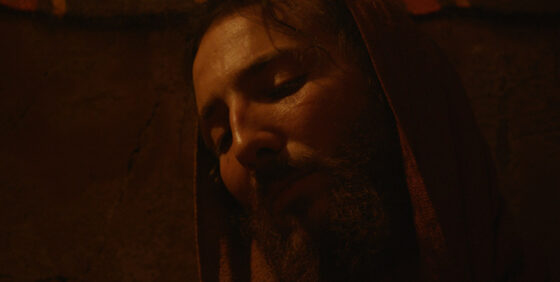 Three years ago, French-Algerian filmmaker Rabah Ameur-Zaïmeche, a consistently ambitious auteur, played the title role in his film Les chants de Mandrin (Smugglers’ Song), a beloved outlaw of pre-Revolutionary France who was barbarically executed in a public square. In a sort of amplification of that project’s scope, the writer-director proposes with Story of Judas a thought-provoking homage to another sort of outsider, a martyr of ancient history.

Spurred on by a childhood interest in the characters of Jesus and his damned disciple, Ameur-Zaïmeche researched into his suspicions against the generalized demonization of Judas, a foundation of Christian anti-Semitism through the ages. His touching and poetic re-reading of the tragic Biblical character’s myth envisages that instead of being the treacherous and greedy rascal he’s usually portrayed to be, Judas was in fact the ultimate, most faithful apostle. He was the only one who risked his life in order to fulfill Jesus’ prime request: to prevent the written reproduction of his Word. While his friend was being unjustly tried and condemned by the Romans, Judas was on a mission to destroy the only true gospel.

Shot in Berber territory at the edge of the Algerian Sahara, Story of Judas sports a no-frills mise en scène that focuses on a few men surrounded with nothing but rocks and sand, thus fully directing our attention to the film’s refined and precise dialogues: words heavy with meaning, rid of all mystical grandeur—words that were meant to be heard aloud rather than transcribed. Like all of Ameur-Zaïmeche’s challenging and free-thinking work, Story of Judas is essential viewing.